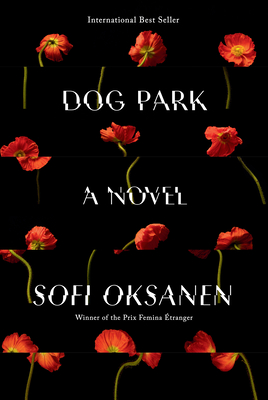 
Not On Our Shelves—Ships in 1-5 Days
INTERNATIONAL BEST SELLER • Set in Ukraine and Finland, a captivating story of intrigue, betrayal, and murder in the global fertility market--from acclaimed writer Sofi Oksanen, "an international publishing sensation frequently likened to Stieg Larsson" (The Guardian).

Helsinki, 2016. Olenka sits on a bench, watching a family play in a dog park. A stranger sits down beside her. Olenka startles; she would recognize this other woman anywhere. After all, Olenka was the one who ruined her life. And this woman may be about to do the same to Olenka. Yet, for a fragile moment, here they are, together—looking at their own children being raised by other people.

Moving seamlessly between modern-day Finland and Ukraine in the early days of its post-Soviet independence, Dog Park is a keenly observed, dark, and propulsive novel set at the intersection of East and West, centered on a web of exploitation and the commodification of the female body.

Sofi Oksanen brings fearless psychological acuity to this captivating story about a woman unable to escape the memory of her lost child, the ruthless powers that still hunt her, and the lies that could well end up saving her.
SOFI OKSANEN is a Finnish-Estonian novelist and playwright. She has received numerous prizes for her work, including the Swedish Academy Nordic Prize, the Prix Femina Étranger, the Budapest Grand Prize, the European Book Prize, and the Nordic Council Literature Prize. She lives in Helsinki. Translated from the Finnish by Owen Witesman.
"A rising Scandinavian star poses troubling questions about the double-edged sword of motherhood and the rancorous debates over women’s bodies." —Oprah Daily

"An intricate, textured slow-burner that paints a vivid picture of a post-Soviet state where gangsters rule and the exploitation of the female body is big business...The pathos is fuel for real suspense." —Guardian

"Remarkably ambitious...The translation conveys the mounting tension...Oksanen has much to say about the price of parenthood and the cost for young women who, with few other options to escape poverty, become egg donors or surrogates." —Sarah Weinman, New York Times Book Review

"There is nothing average about this knotty thriller." —Daily Mail

“Dog Park will tantalize...Oksanen’s tactic of deliberate opacity is popular in prestige television suspense series like 'Killing Eve,' and 'The Flight Attendant,' whose fans, enthralled by pervasive dread and beguiled by jumps between alien settings, don’t mind when motives, identities and places are hard to pin down. The confusion is intrinsic to the allure.” —Wall Street Journal

"A dystopian novel that seems all too real...We learn much about the precarious state of post-Soviet Ukraine...Oksanen subtly but viscerally depicts jeopardy and romance." —Kirkus Reviews

“The Soviet Union’s collapse looms large over Oksanen’s intricate plot, which rivets...Fans of slow-burning suspense will find much to enjoy." —Publishers Weekly

“Dog Park is a stunning, furious depiction of the traumas and struggles of the survivors of the Soviet Union…Oksanen is a master.” —Mesta

“Both a thriller and a historical novel, Dog Park is, in a nutshell, a Grimms’ fairy tale made reality.” —Lire

“Both a sharp analysis of society and an accomplished, ingeniously constructed work of suspense…A Finnish-Estonian Charles Dickens novel.” —Information

“Unendingly fascinating…I of course thought of Margaret Atwood’s novel The Handmaid’s Tale—but also of something far harder to fathom: our current moment.” —Västerbottens-Kuriren

NORWAY
“Oksanen paints an image of life in the former Soviet Union with such vividness that you can see it before your own eyes.” —NRK

“Sofi Oksanen returns to the top of the literary world with Dog Park.” —Dagsavisen