The Nature of the Game: Links Golf at Bandon Dunes and Far Beyond (Hardcover) 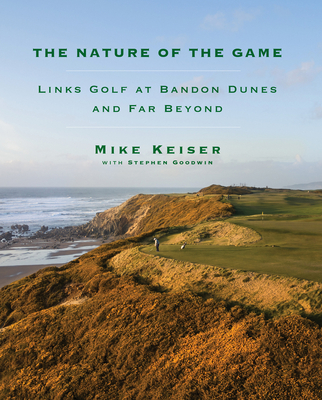 The Nature of the Game: Links Golf at Bandon Dunes and Far Beyond (Hardcover)


On Our Shelves Now at:
Essential reading for every golfer from the sport’s most acclaimed course developer—a comprehensive, firsthand account of restoring the inherent satisfactions of this centuries-old game, from the beauty of natural courses to the joys of walking the course

“Mike Keiser is the best thing to happen to golf since the Big Bertha. He’s the guy who single-handedly saved us from the Fake 100-foot Waterfall Era. He gave us back nature, walking and buddy trips. This is a fascinating read on how in the world he did it.”—Rick Reilly, golf writer

An avid golfer with a demanding career in the greeting card business, Mike Keiser found a new calling on the authentic links courses of Scotland and Ireland. Seized by the beauty of the landscape and the holes running through it, he determined this was how golf was meant to be: inclusive, not private; played on foot, not riding a cart; the courses natural, neither lavish nor contrived. Vowing to transplant this experience to the States, Keiser entered the golf business and, ignoring the advice of experts, built a true links course in Oregon. Bandon Dunes has redefined the game here and become a destination for golfers everywhere.

Those same convictions have now produced other top-ranked courses by Keiser—in Wisconsin, Nova Scotia, Tasmania, and elsewhere—whose magical allure demonstrates what the world’s most gifted golf course architects can accomplish by working on designs that hew to the natural landscape. Keiser’s further commitments—to the caddies, greens crews, and staff at his resorts; to the communities in which they’re located; and to deep environmental stewardship—enhance the singular appeal of these immensely popular courses.

At once an account of inventing a new, life-changing business, a guide to historic course design, and a paean to the sport that has recently experienced a surge of growth, The Nature of the Game is essential reading for every golfer.
MIKE KEISER is the founder of Bandon Dunes. His business career began in 1971, when he and a college roommate successfully launched Recycled Paper Greetings. In his second career as a golf course developer, he’s built award-winning resorts and spectacularly beautiful courses from Tasmania to Nova Scotia. He has lectured on management at the University of Chicago, and he lives with his wife, Lindy, in Chicago, Illinois.

STEPHEN GOODWIN is the author of Dream Golf: The Making of Bandon Dunes (2006) as well as two other golf books and three novels. He served as the director of the Literature Program at the National Endowment for the Arts and co-founded the PEN/Faulkner Foundation. He taught literature and creative writing at George Mason University and now lives with his wife, Robyn, in Vineyard Haven, Massachusetts.
“Engrossing . . . [Keiser’s] accounts of sometimes contentious debates about particular course designs with the world-class talents he hired to work on his projects—Tom Doak, Bill Coore and Ben Crenshaw especially—serve as a kind of primer in classic golf architecture. . . . By the end of the book, one begins to suspect that Mr. Keiser’s ability to tolerate and even encourage opposing points of view is at the heart of his success.”—John Paul Newport, The Wall Street Journal

“Mike’s influence on golf courses and the game has simply been remarkable. He’s led a movement to showcase the sheer joy of playing bouncy, sandy, linksy – and FUN! – golf courses. He will have indeed left the game far better than he found it!”—Mike Davis, former CEO, USGA

“Mike Keiser’s work will be studied for generations. I’ve never played a Keiser course that didn’t leave me thrilled and wanting to go back. His latest book with Stephen Goodwin takes you behind the scenes.”—Jerry Tarde, editor in chief of Golf Digest

“Mike Keiser is the best thing to happen to golf since the Big Bertha. He’s the guy who single-handedly saved us from the Fake 100-foot Waterfall Era. He gave us back nature, walking and buddy trips. This is a fascinating read on how in the world he did it.”—Rick Reilly, golf writer

“A terrific tale of a serial entrepreneur who’s love of golf and business combined to make the Keiser family the best thing to hit golf since Titanium.”—Tim Boyle, president and CEO of Columbia Sportswear Company

“Mike has been an exemplar in my life. His approach to family, friends, fun and business, all shine through in The Nature of the Game. As a humble hero, he imparts these lessons on all those around him, which create a life of richness that cannot be rivalled.”—Ben Cowan-Dewar, CEO of Cabot Cape Breton resort