Lessons: My Path to a Meaningful Life (Hardcover) 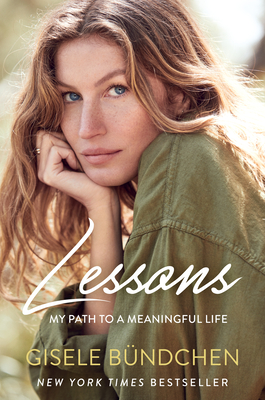 Lessons: My Path to a Meaningful Life (Hardcover)

Supermodel and philanthropist Gisele Bündchen shares personal stories, insights, and photos to explore lessons that have helped shape her life.

Gisele Bündchen's journey began in southern Brazil, growing up with five sisters, playing volleyball, and rescuing the dogs and cats around her hometown.  In fact, she wanted to become either a professional volley player or a veterinarian. But at the age of 14, fate suddenly intervened in in the form of a modeling scout, who spotted her in São Paulo. Four years later, Gisele's appearance in Alexander McQueen's memorably rain-soaked London runway show in the spring 1998 launched her spectacular career as a fashion model, and put an end to the "heroin chic" era of fashion. Since then, Gisele has appeared in almost 400 ad campaigns and on over 1200 magazine covers.  She has walked in more than 470 fashion shows for the most influential brands in the world. Gisele has become an icon, leaving a lasting mark on the fashion industry.

But until now, few people have gotten to know the real Gisele, a woman whose private life stands in dramatic contrast to her public image. In Lessons, she reveals for the first time who she really is and what she's learned over the past 37 years to help her live a meaningful life--a journey that takes readers from a childhood spent barefoot in small-town Brazil, to an internationally successful career, motherhood and marriage to quarterback Tom Brady.

A work of great openness and vulnerability, Lessons reveals the inner life of a very public woman.
Gisele Bündchen is one of the most famous supermodels of all time. Known globally for her business savvy, her philanthropy, and her advocacy for environmental protection, she has been listed by Forbes as one of the Most Powerful Women in the World and among the world's most generous celebrities. She has served as Goodwill Ambassador of the UNEP (United Nations Environment Program), and was named by Harvard University as a Global Environmental Citizen in recognition of her eco-efforts. She lives near Boston with her husband, New England Patriots quarterback Tom Brady, their children, and their dogs. Her profits from this book will go to Luz Foundation, which Bündchen created in 2007 to support social and environmental causes.