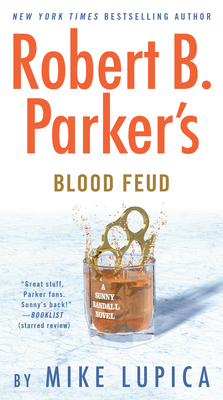 This is book number 7 in the Sunny Randall series.

Robert B. Parker's iconic and irresistible PI Sunny Randall is back, and the stakes are higher than ever as she races to protect her ex-husband--and his Mafia family--from the vengeful plan of a mysterious rival.

Sunny Randall is "on" again with Richie, the ex-husband she never stopped loving and never seemed to be able to let go, despite her discomfort with his Mafia connections. When Richie is shot and nearly killed, Sunny is dragged into the thick of his family's business as she searches for answers and tries to stave off a mob war. But as the bullets start flying in Boston's mean streets, Sunny finds herself targeted by the deranged mastermind of the plot against the Burke family, whose motive may be far more personal than she could have anticipated...
Mike Lupica is a prominent sports journalist and the New York Times-bestselling author of more than forty works of fiction and non-fiction. A longtime friend to Robert B. Parker, he was selected by the Parker estate to continue the Sunny Randall series.
Praise for Robert B. Parker’s Blood Feud

“Lupica, an award-winning sports columnist, author of 40 books, and longtime friend of the late Parker, nails the Sunny Randall character and the Boston criminal milieu that Parker created. The patter is snappy. The criminal honor codes are only understood by the criminals but are dismissed anyway when they interfere with personal enrichment. Even family loyalties come and go. Great stuff, Parker fans. Sunny’s back!”—Booklist (starred review)

“Lupica does justice to the work of MWA Grand Master Robert B. Parker in this splendid continuation of the late author’s Sunny Randall series. . . . Lupica hits the sweet spot by balancing Sunny’s professional hypercompetence with first-person narration that exposes her fears and self-doubts. Parker fans will look forward to seeing what Lupica does with Sunny in her next outing.”—Publisher’s Weekly (starred review)