The Sakura Obsession: The Incredible Story of the Plant Hunter Who Saved Japan's Cherry Blossoms (Paperback) 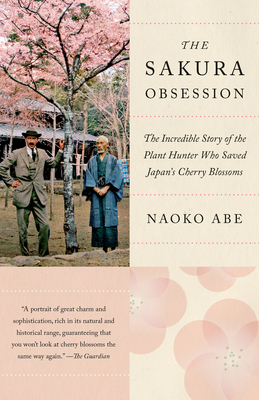 The Sakura Obsession: The Incredible Story of the Plant Hunter Who Saved Japan's Cherry Blossoms (Paperback)


Special Order—Subject to Availability
Each year, the flowering of cherry blossoms marks the beginning of spring. But if it weren’t for the pioneering work of an English eccentric, Collingwood “Cherry” Ingram, Japan’s beloved cherry blossoms could have gone extinct. Ingram first fell in love with the sakura, or cherry tree, when he visited Japan on his honeymoon in 1907 and was so taken with the plant that he brought back hundreds of cuttings with him to England. Years later, upon learning that the Great White Cherry had virtually disappeared from Japan, he buried a living cutting from his own collection in a potato and repatriated it via the Trans-Siberian Express. In the years that followed, Ingram sent more than 100 varieties of cherry tree to new homes around the globe. As much a history of the cherry blossom in Japan as it is the story of one remarkable man, The Sakura Obsession follows the flower from its significance as a symbol of the imperial court, through the dark days of the Second World War, and up to the present-day worldwide fascination with this iconic blossom.
Naoko Abe is a Japanese journalist and nonfiction writer. She was the first female political writer to cover the Japanese prime minister’s office, the foreign ministry, and the defense ministry at Mainichi Shimbun, one of Japan’s largest newspapers. Since moving to London with her British husband and their two sons in 2001,she has worked as a freelance writer and has published five books in Japanese. Her biography of Collingwood Ingram in Japanese won the prestigious Nihon Essayist Club Award in 2016 and she has now rewritten the book with new material for English-language readers.
“A portrait of great charm and sophistication, rich in its natural and historical range, guaranteeing that you won’t look at cherry blossoms the same way again.” —The Guardian

“Like the sakura itself, Ms. Abe’s book is a quiet pleasure—the story of a venerated flower and an English squire graced with the means to turn his passion into his vocation.” —The Wall Street Journal

“A splendid gift: at once a moving personal account as well as a cultural, social and political history of a turbulent period in world history.” —Nature

“A remarkable book. . . . Abe is excellent on the changing symbolism of cherries in Japan and the outlines of Japanese history and culture into which they fit.” —Financial Times

“[A] lovely book. . . . Two tensions animate [The Sakura Obsession]: the difficulty of sending fragile scions around the world and successfully grafting them; and the wrenching historical context.” —The Economist

"An enchanting story about an Englishman’s attempts to preserve Japan’s rich cherry tree heritage in the face of rapid modernization.” —The Japan Times

“An engaging biography of a man who ‘helped change the face of spring.’ . . . Abe shows that Ingram did more than any other ‘cherry guardian’ to keep alive varieties that would otherwise have been lost.” —The Sunday Times (London)

“Combining vast historical research, perceptive cultural interpretation, and a gift for keen, biographical storytelling, Abe’s study of one man’s passion for a singular plant species celebrates the beneficial impact such enthusiasts can have on the world at large.” —Booklist

“In this thoroughly researched book, journalist Naoko Abe tells two stories: one about the 1,200 [year] history of the Japanese cherry blossom, and the other about the English gardener who saved the iconic tree from extinction.” —Bustle

“[The Sakura Obsession,] the story of a British botanist who is credited with being the saviour of the blossom’s many varieties, is . . . not only the tale of a man, or a tree, but of a nation.” —The Times (London)

“An admiring and engaging portrait of an eccentric British enthusiast, one of the last great amateur naturalists of the Edwardian Era.” —Natural History Magazine