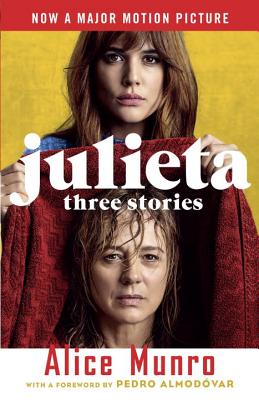 Alice Munro is cherished for her exquisite, affecting meditations on the human heart. In these three linked stories, “Chance,” “Soon,” and “Silence”—which, together, inspired Pedro Almodóvar’s film Julieta—her virtuosic talents are once again on display. The stories follow a schoolteacher named Juliet as she is swept up by fate: meeting an older man on a train and starting an affair; later, visiting her parents as a young mother; and later still, searching for contact with her estranged daughter. As with all of Munro’s characters, Juliet radiates warmth, dignity, and hope, even as she is unflinching in the face of betrayal and loss. In Munro’s hands, her journey is as surprising, extraordinary, and precious as life itself.
Alice Munro grew up in Wingham, Ontario, and attended the University of Western Ontario. She has published thirteen collections of stories as well as a novel, Lives of Girls and Women, and two volumes of Selected Stories. During her distinguished career she has been the recipient of many awards and prizes, including three of Canada’s Governor General’s Literary Awards and two of its Giller Prizes, the Rea Award for the Short Story, the Lannan Literary Award, England’s W. H. Smith Book Award, the National Book Critics Circle Award, and the Man Booker International Prize. In 2013 she was awarded the Nobel Prize for Literature. Her story “The Bear Came Over the mountain” was filmed by Sarah Polley as Away from Her, and “Hateship, Friendship, Courtship, Loveship, Marriage” as Hateship Loveship. She lives in Port Hope, Canada, on Lake Ontario.
“One of the great short story writers not just of our time but of any time.” —The New York Times Book Review

“Alice Munro is not only revered, she is cherished.” —The New York Review of Books

“Her work felt revolutionary when I came to it, and it still does.” —Jhumpa Lahiri

“She is one of the handful of writers, some living, most dead, whom I have in mind when I say that fiction is my religion.” —Jonathan Franzen

“A true master of the form.” —Salman Rushdie

“The authority she brings to the page is just lovely.” —Elizabeth Strout

“She’s the most savage writer I’ve ever read, also the most tender, the most honest, the most perceptive.” —Jeffery Eugenides

“Alice Munro can move characters through time in a way that no other writer can.”—Julian Barnes

“She is a short-story writer who…reimagined what a story can do.” —Loorie Moore

“There’s probably no one alive who’s better at the craft of the short story.” —Jim Shepard