I am Lucille Ball (Ordinary People Change the World) (Hardcover) 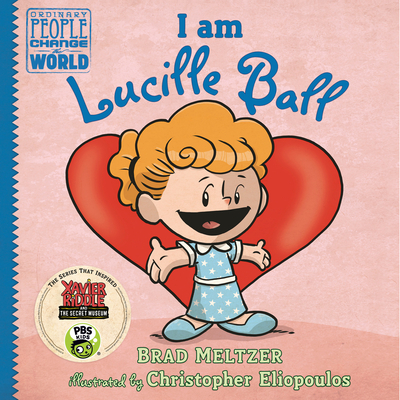 I am Lucille Ball (Ordinary People Change the World) (Hardcover)

In this sixth entry in the New York Time Bestselling biography series, humor is the heroic trait, and modern icon Lucille Ball is celebrated. (Cover may vary)

Lucille Ball could make any situation funny. By making people around the world laugh, she proved that humor can take on anything. She never changed how she behaved to seem "proper," even when other people pressured her to. By remaining true to who she was, she made her mark in comedy and television—even becoming the first female CEO of a major Hollywood studio!

This friendly, fun biography series inspired the PBS Kids TV show Xavier Riddle and the Secret Museum. One great role model at a time, these books encourage kids to dream big. Included in each book are:

• A timeline of key events in the hero’s history
• Photos that bring the story more fully to life
• Comic-book-style illustrations that are irresistibly adorable
• Childhood moments that influenced the hero
• Facts that make great conversation-starters
• A virtue this person embodies: Lucille Ball's humor and how it carried her to success is highlighted here.

You’ll want to collect each book in this dynamic, informative series!

Brad Meltzer is the New York Times bestselling author of Heroes for My Son, Heroes for My Daughter, The Lincoln Conspiracy, and a number of suspense novels like The Lightning Rod. He also helped find the missing 9/11 flag with his History Channel television show Brad Meltzer’s Lost History. He lives in Florida with his wife and their three children. (And did you know that a picture of Brad is hidden in every book in this series?)

Christopher Eliopoulos began his illustration career at Marvel Comics, and has worked on thousands of comics, including his own Cow Boy and Franklin Richards: Son of a Genius. He is the author and illustrator of the picture books The Yawns Are Coming! and The Giggles Are Coming! and the graphic novels Cosmic Commandos and Monster Mayhem. He lives in New Jersey with his wife and their college-graduate twin sons (who also make an appearance in each Ordinary People Change the World book).