Captain of Her Soul: The Life of Marion Davies (Hardcover) 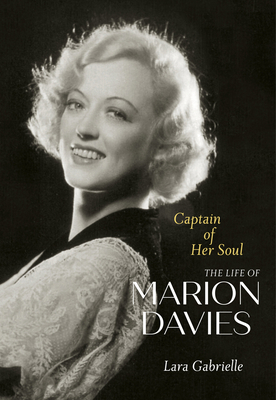 Captain of Her Soul: The Life of Marion Davies (Hardcover)


On Our Shelves Now at:
The comprehensive critical biography of silent-screen star Marion Davies, who fittingly referred to herself as "the captain of my soul."

From Marion Davies's humble days in Brooklyn to her rise to fame alongside press baron William Randolph Hearst, the public life story of the film star plays like a modern fairy tale shaped by gossip columnists, fan magazines, biopics, and documentaries. Yet the real Marion Davies remained largely hidden from view, as she was wary of interviews and trusted few with her true life story. In Captain of Her Soul, Lara Gabrielle pulls back layers of myth to show a complex and fiercely independent woman, ahead of her time, who carved her own path.

Through meticulous research, unprecedented access to archives around the world, and interviews with those who knew Davies, Captain of Her Soul counters the public story. This book reveals a woman who navigated disability and social stigma to rise to the top of a young Hollywood dominated by powerful men. Davies took charge of her own career, negotiating with studio heads and establishing herself as a top-tier comedienne, but her proudest achievement was her philanthropy and advocacy for children. This biography brings Davies out of the shadows cast by the Hearst legacy, shedding light on a dynamic woman who lived life on her own terms and declared that she was "the captain of her soul."
Lara Gabrielle is a film writer and researcher whose work on Marion Davies has been featured in the Missouri Review and on PBS's American Experience. She has spoken about Davies at film festivals and retrospectives worldwide and has served as a consultant on her life and legacy for books, dissertations, and film projects. Gabrielle lives in Oakland.
"Actor Marion Davies (1897–1961) may have lived ‘a life shrouded in mystery, rumor, and half-truths,’ but she was witty, talented, and loyal, according to this sparkling debut from film historian Gabrielle. . . . a breezy, colorful saga of Old Hollywood, full of showbiz picaresque, glamorous parties at Hearst’s San Simeon castle, and a touching romance between two flawed, magnetic personalities. Film buffs will want to check this one out."
— Publishers Weekly

"[A] scrupulously researched biography of American actress Davies (1897–1961), who was for a long time better known as the mistress of tabloid publisher William Randolph Hearst. . . . For fans of old-Hollywood lore and classic movies, especially those starring Marion Davies."
— Library Journal

"Now, finally, there is a deeply researched and fair-minded biography of Davies’s life and movie work . . . . Gabrielle, like a detective or an archaeologist, has reconstructed a life history and made a convincing case . . . . that Marion was a complex, happy, and talented actress . . . . her love affair with W.R. Hearst was genuine, long-lasting, and intensely satisfying."
— Alta Journal

"An entertaining, first-rate biography that necessarily serves . . . . as a corrective to Hollywood myth.”
— Air Mail

"Author Gabrielle has given us a gift: an honest biography of a woman whose life and career have long been misunderstood. . . .  In short, this is the book Marion Davies has always deserved."

"Gabrielle's book proves to be a fascinating read, from start to finish. The author documents the glamorous and epic parties at San Simeon, giving readers a picture of Hollywood's golden era. She also reveals the complicated, but enduring romance between Hearst and Davies."
— Pop Culture Classics

"One of the most striking qualities of Captain of Her Soul is how the author powerfully portrays the actress’s spirit through the pages. . . .a must-read."
— The Wonderful World of Cinema