Democracy’s Chief Executive: Interpreting the Constitution and Defining the Future of the Presidency (Hardcover) 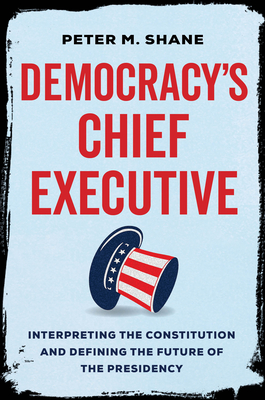 Democracy’s Chief Executive: Interpreting the Constitution and Defining the Future of the Presidency (Hardcover)


On Our Shelves Now at:
Legal scholar Peter M. Shane confronts U.S. presidential entitlement and offers a more reasonable way of conceptualizing our constitutional presidency in the twenty-first century.

In the eyes of modern-day presidentialists, the United States Constitution’s vesting of “executive power” means today what it meant in 1787. For them, what it meant in 1787 was the creation of a largely unilateral presidency, and in their view, a unilateral presidency still best serves our national interest. Democracy’s Chief Executive challenges each of these premises, while showing how their influence on constitutional interpretation for more than forty years has set the stage for a presidency ripe for authoritarianism.

Democracy’s Chief Executive explains how dogmatic ideas about expansive executive authority can create within the government a psychology of presidential entitlement that threatens American democracy and the rule of law. Tracing today’s aggressive presidentialism to a steady consolidation of White House power aided primarily by right-wing lawyers and judges since 1981, Peter M. Shane argues that this is a dangerously authoritarian form of constitutional interpretation that is not even well supported by an originalist perspective. Offering instead a fresh approach to balancing presidential powers, Shane develops an interpretative model of adaptive constitutionalism, rooted in the values of deliberative democracy. Democracy’s Chief Executive demonstrates that justifying outcomes explicitly based on core democratic values is more, not less, constraining for judicial decision making—and presents a model that Americans across the political spectrum should embrace.
Peter M. Shane is Jacob E. Davis and Jacob E. Davis II Chair in Law Emeritus at the Ohio State University Moritz College of Law and author of Madison’s Nightmare: How Executive Power Threatens American Democracy.