Borderland Circuitry: Immigration Surveillance in the United States and Beyond (Paperback) 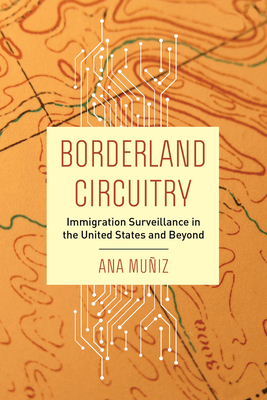 Borderland Circuitry: Immigration Surveillance in the United States and Beyond (Paperback)


Not On Our Shelves—Ships in 1-5 Days
Political discourse on immigration in the United States has largely focused on what is most visible, including border walls and detention centers, while the invisible information systems that undergird immigration enforcement have garnered less attention. Tracking the evolution of various surveillance-related systems since the 1980s, Borderland Circuitry investigates how the deployment of this information infrastructure has shaped immigration enforcement practices. Ana Muñiz illuminates three phenomena that are becoming increasingly intertwined: digital surveillance, immigration control, and gang enforcement. Using ethnography, interviews, and analysis of documents never before seen, Muñiz uncovers how information-sharing partnerships between local police, state and federal law enforcement, and foreign partners collide to create multiple digital borderlands. Diving deep into a select group of information systems, Borderland Circuitry reveals how those with legal and political power deploy the specter of violent cross-border criminals to justify intensive surveillance, detention, brutality, deportation, and the destruction of land for border militarization.
Ana Muñiz is Assistant Professor in the Department of Criminology, Law and Society at the University of California, Irvine. She is the author of Police, Power, and the Production of Racial Boundaries.
"Borderland spaces, and the people who are navigating the violence of bordering processes within them, come alive in the pages of this worthwhile book."
— Jotwell: The Journal of Things We Like (Lots)