Homegrown Hate: Why White Nationalists and Militant Islamists Are Waging War against the United States (Hardcover) 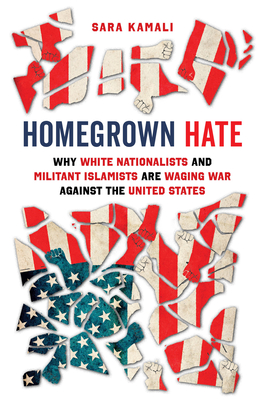 Homegrown Hate: Why White Nationalists and Militant Islamists Are Waging War against the United States (Hardcover)


Not On Our Shelves—Ships in 1-5 Days
To better understand current events and threats, this book outlines the organizations and beliefs of domestic terrorists in the United States and how to counter their attacks on American democracy.

Who are the American citizens—White nationalists and militant Islamists—perpetrating acts of terrorism against their own country? What are their grievances and why do they hate? How can this transnational peril be effectively addressed?

Homegrown Hate is a groundbreaking and deeply researched work that directly compares White nationalists and militant Islamists in the United States. In this timely book, scholar and holistic justice activist Sara Kamali examines these Americans’ self-described beliefs, grievances, and rationales for violence, and details their organizational structures within a transnational context. She presents compelling insight into the most pressing threat to homeland security not only in the United States, but in nations across the globe: citizens who are targeting their homeland according to their respective narratives of victimhood. She also explains the hate behind the headlines and provides the tools to counter this hate from within, cogently offering hope in uncertain and divisive times. Innovative and engaging, this is an indispensable resource for all who cherish equity and justice in the United States and around the world.
Sara Kamali is the founder and director of Kamali Consulting, a firm that supports organizations to center equity and to create a culture of belonging in their policies, practices, and programs. She is also a holistic justice activist and a scholar of systemic inequities, White nationalism, and militant Islamism. Her scholarship and activism address how interlocking institutions of power oppress the many while maintaining systems of privilege for a select few.

"Eerily prescient. . . . Kamali rebuts the idea that 'lone wolves' drive terrorism and focuses on a comparative analysis of the White nationalist and militant Islamist groups that can drive it. She examines their aims, beliefs, tactics, rhetoric, organizational structures, and influencers, such as the Oath Keepers, Osama bin Laden, Dylann Roof, neo-Nazis, and Timothy McVeigh."
— Kirkus Reviews

"The literature on White nationalists and militant Islamists gains an important new entry examining the reasons for acts of terrorism perpetrated by American citizens against the United States. . . . Homegrown Hate's comparative approach allows for a nuanced and complex discussion which not only puts religion at the center of the analysis, but is clear in its assertion that to reduce the activity of terrorists solely to religious motivations ignores the interplay of various social and political factors, reminding the reader that even those who share these corrupted beliefs do not engage in acts of terrorism."
— Ethnic and Racial Studies

"Overall, Homegrown Hate is a valuable up-to-date resource not only for scholars and policymakers but for anyone who is looking to gain an in-depth understanding of current security threats and political violence facing the United States and many other countries around the world. . . . The book is a significant contribution to the field- deeply informative and written in an engaging manner."

"A must-read for students, academics, journalists and, in particular, policy-makers and actors in security bureaucracy, who are interested in White nationalism, domestic terrorism and counterterrorism in the USA."
— Islam and Christian-Muslim Relations

"Homegrown Hate is a model of innovative scholarship. . . . Readers interested in a new perspective on the topic of religion and white nationalism will appreciate her work, as well those interested in media, comparative social movements, and religion and criminology. Finally, those seeking new models of scholarship will find Kamali’s approach to surfacing similarities between two groups who see themselves in a cosmic battle to be an invigorating challenge to how studies of religion are often done."

"Homegrown Hate is disturbing, yet it is one of the most important new books detailing domestic extremists available today."
— CHOICE