Menace to Empire: Anticolonial Solidarities and the Transpacific Origins of the US Security State (American Crossroads #63) (Hardcover) 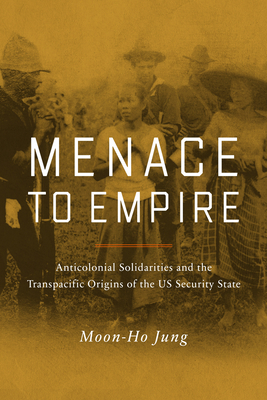 Menace to Empire: Anticolonial Solidarities and the Transpacific Origins of the US Security State (American Crossroads #63) (Hardcover)


On Our Shelves Now at:
This history reveals how radical threats to the United States empire became seditious threats to national security and exposes the antiradical and colonial origins of anti-Asian racism.

Menace to Empire transforms familiar themes in American history. This profoundly ambitious history of race and empire traces both the colonial violence and the anticolonial rage that the United States spread across the Pacific between the Philippine-American War and World War II. Moon-Ho Jung argues that the US national security state as we know it was born out of attempts to repress and silence anticolonial subjects, from the Philippines and Hawaiʻi to California and beyond.

Jung examines how various revolutionary movements spanning the Pacific confronted the US empire. In response, the US state closely monitored and brutally suppressed those movements, exaggerating fears of pan-Asian solidarities and sowing anti-Asian racism. Radicalized by their opposition to the US empire and racialized as threats to US security, peoples in and from Asia pursued a revolutionary politics that engendered and haunted the national security state—the heart and soul of the US empire ever since.

Moon-Ho Jung is Professor of History at the University of Washington and the author of Coolies and Cane: Race, Labor, and Sugar in the Age of Emancipation.

"Menace to Empire is a comprehensive study of violence against Asians, the struggle to find their place in the United States and undergoing the adverse effects of the tight security US officials implemented as they grew increasingly suspicious of the influence and intentions of Asians in America."
— European Journal of American Culture