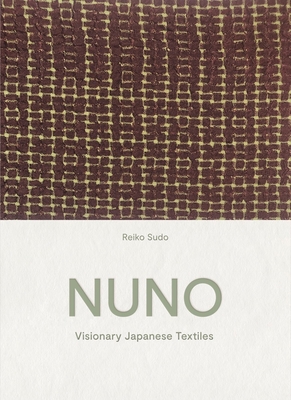 A career-spanning monograph of the work of NUNO, one of Japan’s most innovative and respected textile design studios.

Named for the word meaning “cloth” in Japanese, NUNO is one of Japan’s most important textile companies. It was founded in 1984 by the legendary Junichi Arai and the company’s current director, Reiko Sudo, and is recognized for weaving together tradition and cutting-edge technology. NUNO designers are inspired the past, present, and future, integrating unexpected elements, such as paper, feathers, or aluminum, with industrial methods, such as spatter-plating and chemical etching. All NUNO textiles—more than 2,500 have been created—are produced in Japan and are usually the handiwork of individual craftspeople. Each bolt of cloth has a story to tell.

NUNO’s textiles have appeared regularly in books, textile exhibitions, and museum collections, but this volume is the first comprehensive monograph on their work. Based on interviews, archival research, and factory visits and with insightful texts, NUNO is illustrated with specially commissioned photos and drawings. Featuring the most outstanding, influential, and experimental fabrics, the book is organized into thematic chapters, each based on a family of textiles. Interspersed are illuminating essays from a wide range of contributors, from writer Haruki Murakami and architect Toyo Ito to designer Kenya Hara. Including hundreds of illustrations, this unique sourcebook offers rich insights into the heritage, techniques, materials, innovations, and production of one of Japan’s most admired crafts.

Reiko Sudo is managing director of NUNO and one of Japan’s most influential textile designers. Her textiles have been exhibited around the world, including the Metropolitan Museum of Art and the Museum of Modern Art in New York.

Naomi Pollock is a design writer who lived and worked in Japan for over thirty years. Her most recent publication is Japanese Design Since 1945.