Progress and Poverty: An Inquiry Into the Cause of Industrial Depressions and of Increase of Want with Increase of Wealth . . . the Remedy (Paperback) 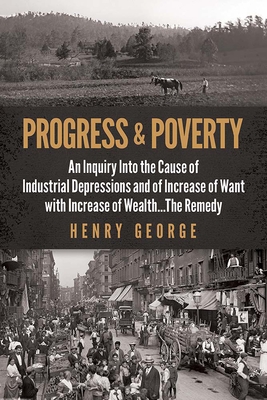 Progress and Poverty: An Inquiry Into the Cause of Industrial Depressions and of Increase of Want with Increase of Wealth . . . the Remedy (Paperback)


Not On Our Shelves—Ships in 1-5 Days
(This book cannot be returned.)
Progress and Poverty offers a fundamental inquiry into the cause of industrial depressions and the persistence of poverty and advancing wealth. Upon its 1879 debut, it quickly became the bestselling book on economics and was a principal inspiration for the United States' Progressive Era of the 1890s through the 1920s. It also influenced major public and political figures such as Albert Einstein, Winston Churchill, and Sun Yat-sen.
Henry George proposed a "single tax" that would assess the value of land--not buildings or other enhancements, just the land itself. He maintained that society as a whole would share in the benefits: wages could be raised, the use of land improved, and there would be no need to tax productive activity. Land speculation would be discouraged, and development would be promoted. In elaborating upon these ideas, George addressed many economic subjects, such as tariffs and trade, currency, interest, capital, economic cycles, and other social issues.
Henry George (1839-97) went to sea on a merchant ship at age 15 and by the end of the 1850s was working in San Francisco as a typesetter. A career in journalism followed, and George gradually become a successful popular speaker on the issues of his day as well as an effective writer. He moved to New York around the time Progress and Poverty was published and ran for mayor, losing in an election that may have been marred by fraud. His second campaign for mayor ended with a fatal stroke. Thousands turned out for his funeral, which was described as the largest in New York's history (or at least the largest since the death of Abraham Lincoln); even George's bitterest opponents at Tammany Hall flew their flag at half-staff on that day.