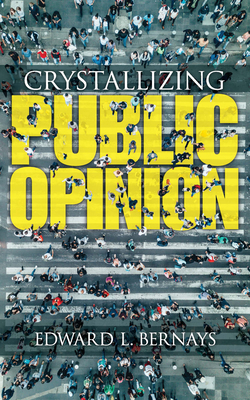 
Not On Our Shelves—Ships in 1-5 Days
(This book cannot be returned.)
Famed as the father of public relations, Edward Bernays pioneered the technique of working to change attitudes rather than just selling products. In this 1923 classic, the first book ever written about the public relations industry, he delineates the approaches that corporations and governments have taken for the past century to influence social tendencies.
Crystallizing Public Opinion identifies the techniques employed by public relations professionals, from authoritative-sounding surveys to persuasive endorsements from opinion leaders, celebrities, and experts. Bernays -- whose high-profile clients included Procter & Gamble, General Electric, CBS, NBC, and Time, Inc. -- cites examples from his successful campaigns, including a physician-endorsed promotion of bacon as a healthy breakfast option. He quotes leading theorists on the role of herd mentality in the minds of the educated as well as the ignorant, and he explains the value of communicating the right facts at the right time to a targeted audience. Although technology has changed in the years since this book's debut, human nature has not, and these principles remain of timeless value to business and marketing professionals, students of public relations, and other readers.
Edward Bernays (1891-1995) was a pioneer in the field of public relations who emigrated from his native Austria to the United States in the 1930s. During his career in public relations, Bernays devised and popularized many techniques for influencing public opinion on behalf of a huge roster of clients that included many corporations and industrial organizations, governments around the world, and advocacy groups in many fields. "Public relations, effectively used, helps validate an underlying principle of our society -- competition in the market place of ideas and things," he wrote in 1971.