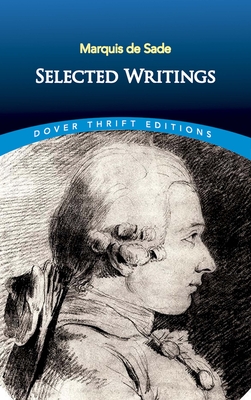 
Special Order—Subject to Availability
(This book cannot be returned.)
An eighteenth-century philosopher and libertine whose name is synonymous with sexual cruelty, the Marquis de Sade (1740-1814) was among the first writers to explore the dark, hidden impulses of human nature. The French aristocrat demanded complete sexual freedom and political liberty, and his acts of perversion, criminal depravity, and blasphemy led to his confinement in the Bastille and other prisons. While in jail, he wrote the graphic erotic works that ensured his lasting notoriety and literary fame.
This concise and comprehensive anthology, edited and translated by noted expert Margaret Crosland, includes excerpts from Justine, The 120 Days of Sodom, Philosophy in the Bedroom, Juliette, and other works. Crosland provides context for the shocking moral relativism and hedonistic nihilism of de Sade, whose enduringly relevant writings prefigured those of Nietzsche and Freud and who served as an inspiration to the Surrealists and other latter-day artists.
The Marquis de Sade (1740-1814) was a French aristocrat, sexual libertine, political radical, philosopher, and writer whose work led to the coinage of the terms sadism and sadist. His works combine philosophical discourse with pornography, depicting sexual fantasies with violent, criminal, and blasphemous elements in support of his belief in unrestrained individual freedom. Margaret Crosland is a translator of French and Italian literature who has written biographies of Colette, Jean Cocteau, Simone de Beauvoir, and Edith Piaf. She has translated the works of Emile Zola, Colette, Cocteau, and others.