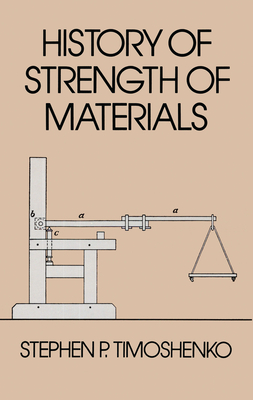 
Not On Our Shelves—Ships in 1-5 Days
(This book cannot be returned.)
Strength of materials is that branch of engineering concerned with the deformation and disruption of solids when forces other than changes in position or equilibrium are acting upon them. The development of our understanding of the strength of materials has enabled engineers to establish the forces which can safely be imposed on structure or components, or to choose materials appropriate to the necessary dimensions of structures and components which have to withstand given loads without suffering effects deleterious to their proper functioning.
This excellent historical survey of the strength of materials with many references to the theories of elasticity and structures is based on an extensive series of lectures delivered by the author at Stanford University, Palo Alto, California. Timoshenko explores the early roots of the discipline from the great monuments and pyramids of ancient Egypt through the temples, roads, and fortifications of ancient Greece and Rome. The author fixes the formal beginning of the modern science of the strength of materials with the publications of Galileo's book, Two Sciences, and traces the rise and development as well as industrial and commercial applications of the fledgling science from the seventeenth century through the twentieth century.
Timoshenko fleshes out the bare bones of mathematical theory with lucid demonstrations of important equations and brief biographies of highly influential mathematicians, including: Euler, Lagrange, Navier, Thomas Young, Saint-Venant, Franz Neumann, Maxwell, Kelvin, Rayleigh, Klein, Prandtl, and many others. These theories, equations, and biographies are further enhanced by clear discussions of the development of engineering and engineering education in Italy, France, Germany, England, and elsewhere. 245 figures.
The father of modern engineering mechanics, Stephen Timoshenko (1868-1972) taught for decades at Stanford University. His seminal engineering texts remain in wide use.