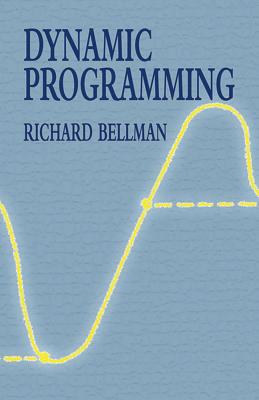 
Not On Our Shelves—Ships in 1-5 Days
(This book cannot be returned.)
An introduction to the mathematical theory of multistage decision processes, this text takes a functional equation approach to the discovery of optimum policies. Written by a leading developer of such policies, it presents a series of methods, uniqueness and existence theorems, and examples for solving the relevant equations. The text examines existence and uniqueness theorems, the optimal inventory equation, bottleneck problems in multistage production processes, a new formalism in the calculus of variation, strategies behind multistage games, and Markovian decision processes. Each chapter concludes with a problem set that Eric V. Denardo of Yale University, in his informative new introduction, calls a rich lode of applications and research topics. 1957 edition. 37 figures.
The Dawn of Dynamic Programming Richard E. Bellman (1920-1984) is best known for the invention of dynamic programming in the 1950s. During his amazingly prolific career, based primarily at The University of Southern California, he published 39 books (several of which were reprinted by Dover, including Dynamic Programming, 42809-5, 2003) and 619 papers. Despite battling the crippling effects of a brain injury, he still published 100 papers during the last eleven years of his life. He was a frequent informal advisor to Dover during the 1960s and 1970s. Professor Bellman was awarded the IEEE Medal of Honor in 1979 for contributions to decision processes and control system theory, particularly the creation and application of dynamic programming. The IEEE citation continued: Richard Bellman is a towering figure among the contributors to modern control theory and systems analysis. His invention of dynamic programming marked the beginning of a new era in the analysis and optimization of large-scale systems and opened a way for the application of sophisticated computer-oriented techniques in a wide variety of problem areas ranging from the design of guidance systems for space vehicles to pest control and network optimization. In the Author's Own Words: There are many questions that are difficult to answer, but hardly worth asking. The well-trained mathematician does not measure the value of a problem solely by its intractability. The challenge is there, but even very small boys do not accept all dares. Scientific developments can always be made logical and rational with sufficient hindsight. It is amazing, however, how clouded the crystal ball looks beforehand. We all wear such intellectual blinders and make such inexplicable blunders that it is amazing that any progress is made at all. -- Richard Bellman