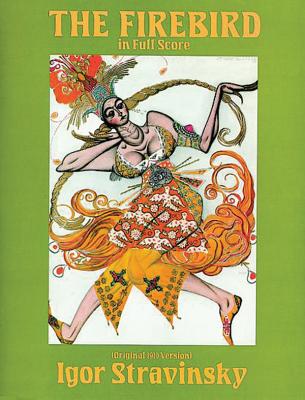 In 1910, following his successful orchestration of selections for the ballet Les Sylphides, the innovative young composer Igor Stravinsky was commissioned by the director of the Ballets Russes, Serge Diaghilev, to create a completely new score. The dazzling result was The Firebird, a work which brought overnight success to its creator and distinguished him as the most gifted of the younger generation of Russian composers. Based on Russian fairy tales, the piece, according to Grove's Dictionary of Music and Musicians, has all the coloring of a Russian child's picture book...brilliant orchestration, glowing color...an extraordinary evocative power which literally enchants the listener.
Today, The Firebird is as popular and enthusiastically received as it was following its triumphant premiere in Paris more than a century ago. Greatly admired for its orchestrations and harmony, the composition is widely studied by practicing musicians and music students.
Now the complete score of this modern masterpiece is available in this handsome, authoritative, and inexpensive edition, which includes a list of instruments and English translations of the stage directions.

The leading composer of his day, Igor Stravinsky experimented with virtually every technique of 20th century music. Throughout his long and prolific career, he produced symphonies, concertos, choral works, operas, and ballets.