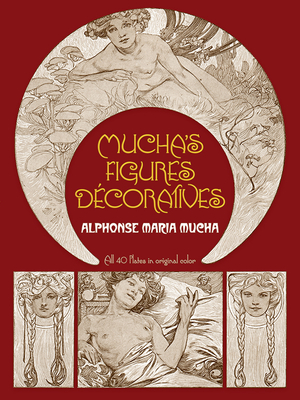 To many, Alphonse Maria Mucha (1860-1939) is best known for his beautiful bell poque posters and magnificent decorative panels. His distinctive graphic approach to the 1895 poster advertising Sarah Bernhardt's performance in Gismonda captured the Parisian public's imagination and catapulted the artist into overnight success. During the next ten years he became the high priest of Art Nouveau, publishing several stylebooks which were to have a lasting influence on 20th-century art and design.
Figures decoratives, originally published in 1905, is a landmark book of the Art Nouveau movement and perhaps best exemplifies Mucha's artistic product in the years 1895-1905, the decade that made him famous. Mucha's purity of line and beauty of proportion take their inspiration from nature. But more than nature's imitator, he was its interpreter, translating its rhythms and designs into works that exude an indefinable charm. His unique approach combined originality of invention with spontaneous energy supported by flawless draftsmanship.
This new edition of Figures decoratives carefully reproduces all forty of the original two-color plates from a rare first edition now valued at several thousand dollars. Comprised of finished pen, pencil, charcoal, and chalk, this volume represents the essence of Mucha's genius and documents the subtle shadings and linear excellence that characterized his masterful illustrations. Placed in rectangles, triangles, stars, circles, and a number of irregular geometric forms are figures of women, young girls, and children of both sexes. The harmony between the movement of head, limbs, and drapery and the sense of balance in each pose are the result of Mucha's instinct for composition, gift for ornamentation, and profound knowledge of his craft.
Mucha's hand and eye are clearly evident in all his work though one can see other artistic influences which shaped the artist's development, including Gauguin's cloissonnism, Horta's and Van de Velde's kinetic treatment of curvilinear design, as well as the linear conventions of Moorish architecture and Islamic ornamentation. Yet Mucha himself believed that he owed his greatest artistic debt to the folk art traditions of his native Moravia.

Alphonse Maria Mucha (1860-1939) is best known to the general public for his posters of Sarah Bernhardt and magnificent decorative panels such as The Seasons. Among graphic artists and commercial designers, Mucha is praised for the innovative style books that pioneered the use of Art Nouveau in commercial packaging, design, and ornament.