Warping Time: How Contending Political Forces Manipulate the Past, Present, and Future (Hardcover) 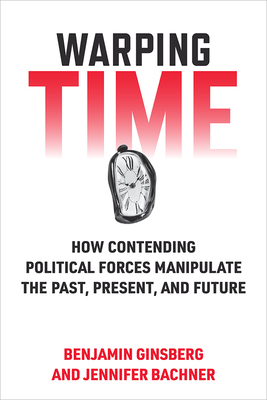 Warping Time: How Contending Political Forces Manipulate the Past, Present, and Future (Hardcover)

Warping Time makes use of a number of experiments in which respondents are told various stories about the past and future and then the impact of these stories upon contemporary preferences is measured. In Benjamin Ginsberg and Jennifer Bachner’s simple experiments, “history lessons” could move contemporary policy preferences by an average of 16 percentage points; forecasts of the future could move contemporary policy preferences by an average of 12 percentage points; and the two together moved preferences an average of 21 percentage points. And, to give the entire matter an Orwellian flavor, in the case of history lessons, they estimate an average “erasure effect” of 8.5 percentage points—the difference between those with long-held preferences and those whose preferences had been changed but who seemed not to recall that they previously held other preferences. Three propositions follow from these observations. First, the fact that the past, present, and future are subject to human manipulation suggests that history is driven by ideas and is not simply the product of impersonal forces, material conditions, or past choices. Humans are the architects of history, not its captives. Second, what they conceive to be political reality is rather tenuous. Changes in our understanding of the past or future can quite substantially alter general perceptions of and action in the present. Third, manipulation of time, especially the relationship between past and future, can function as a powerful political tool. In essence, political reality can be politically determined. Past, present, and future are not givens. They are products of political struggle, and victories in those struggles are, in turn, subject to future revision as emergent political forces find that the currently accepted past and future are inconsistent with their own ideas and interests.

“Ginsberg and Bachner’s considerations of the political importance of time—weaved with astute observations from domestic and international politics, religion, and film history—is nothing short of brilliant. I cannot remember being this excited about a book.”