Army of Empire: The Untold Story of the Indian Army in World War I (Hardcover) 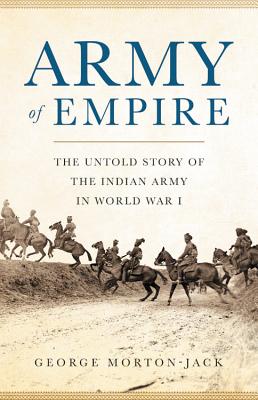 Army of Empire: The Untold Story of the Indian Army in World War I (Hardcover)


Special Order—Subject to Availability
Drawing on untapped new sources, the first global history of the Indian Expeditionary Forces in World War I

While their story is almost always overlooked, the 1.5 million Indian soldiers who served the British Empire in World War I played a crucial role in the eventual Allied victory. Despite their sacrifices, Indian troops received mixed reactions from their allies and their enemies alike-some were treated as liberating heroes, some as mercenaries and conquerors themselves, and all as racial inferiors and a threat to white supremacy. Yet even as they fought as imperial troops under the British flag, their broadened horizons fired in them new hopes of racial equality and freedom on the path to Indian independence.

Drawing on freshly uncovered interviews with members of the Indian Army in Iraq and elsewhere, historian George Morton-Jack paints a deeply human story of courage, colonization, and racism, and finally gives these men their rightful place in history.
George Morton-Jack studied at Oxford University and currently works as a lawyer in London. The author of The Indian Army on the Western Front, he lives in Bristol, UK.
"This book is essential for devotees of WWI military history and those fascinated by the complexities of empire."—Publishers Weekly, starred review

"Revelatory... fluent and colourful... This book describes the war as a worldwide conflict involving a million Indian soldiers [and] shows how crucial they were to Allied success."
—Telegraph (UK)

"Absorbing [and] welcome... explores a remarkably diverse fighting force 1.5 million men of all castes and creeds... This book is a fitting testament to the sacrifices they made."
—Guardian (UK)

"[A] highly detailed look at India's global effort in their (mostly) patriotic devotion to the empire ... World War I fans will appreciate the broad look."—Kirkus

"A splendid book ... comprehensive and distinctive... A multi-layered, rigorously researched and empathetically interpreted account of the Indian contribution to the Great War."—Hindustan Times

"One of the most interesting and informative works yet published on the Indian Army during World War I ... Morton-Jack's use of little known accounts from Indian Army veterans is what really brings the book to life"—History of War Magazine (UK)

"Beautifully written . . . essential to a proper understanding of the war and of our world of today. A much needed book"—Michael Morpurgo, author of War Horse

"One of this year's most enlightening reads [and] revelatory... Written with brilliant verve from the perspective of the Indian soldier and using almost entirely new information, it fits the Indian experience superbly into the overall Great War narrative"—Andrew Roberts, author of Churchill: Walking with Destiny

"An outstanding book that brings to life the experiences of Indian soldiers in all of the theatres of WWI, from German colonies in China and Africa to the Middle East and the Western Front. Thoroughly researched and engagingly written, George Morton-Jack restores the Indian Army to its rightful place in the history of the Great War."
—Eugene Rogan, author of The Fall of the Ottomans

"The Indian Army's role in World War I is perhaps the least understood dimension of that global conflict. Although the centenary of the war sparked off some interest in the stories of these soldiers, there has been no sustained examination of their experiences. Army of Empire fills this void in our historical understanding admirably and comprehensively. Widely researched and vividly written, George Morton-Jack's account of the Indian Army's crucial contribution to the Allied victory is unlikely to be surpassed any time soon."
—Srinath Raghavan, author of India's War

"Fascinating....George Morton-Jack writes with the compassionate heart of a poet and the cold eye of a historian seeing the vast canvas of the ages. We owe him gratitude for bringing light to a deserving but neglected part of world history; those of us with an interest in South Asia are forever indebted to him."
—Akbar Ahmed, Ibn Khaldun Chair of Islamic Studies, American University