The Tyranny of Experts: Economists, Dictators, and the Forgotten Rights of the Poor (Paperback) 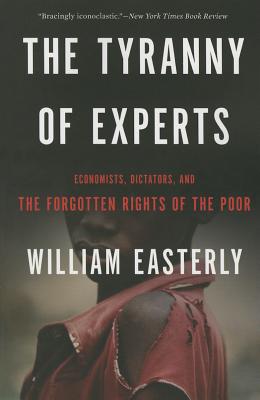 The Tyranny of Experts: Economists, Dictators, and the Forgotten Rights of the Poor (Paperback)


Special Order—Subject to Availability
In this "bracingly iconoclastic” book (New York Times Book Review), a renowned economics scholar breaks down the fight to end global poverty and the rights that poor individuals have had taken away for generations.

In The Tyranny of Experts, renowned economist William Easterly examines our failing efforts to fight global poverty, and argues that the "expert approved" top-down approach to development has not only made little lasting progress, but has proven a convenient rationale for decades of human rights violations perpetrated by colonialists, postcolonial dictators, and US and UK foreign policymakers seeking autocratic allies. Demonstrating how our traditional antipoverty tactics have both trampled the freedom of the world's poor and suppressed a vital debate about alternative approaches to solving poverty, Easterly presents a devastating critique of the blighted record of authoritarian development. In this masterful work, Easterly reveals the fundamental errors inherent in our traditional approach and offers new principles for Western agencies and developing countries alike: principles that, because they are predicated on respect for the rights of poor people, have the power to end global poverty once and for all.
William Easterly is Professor of Economics at New York University and Co-director of the NYU Development Research Institute. He is the author of several books on global politics and economics, including The White Man's Burden: Why the West's Efforts to Aid the Rest Have Done So Much Ill and So Little Good (winner of the FA Hayek Award). His writing has appeared in the New York Times, Wall Street Journal, Financial Times, New York Review of Books, and Washington Post. Foreign Policy magazine named him among the Top 100 Global Public Intellectuals. He lives in New York.
"A provocative book
that will rile the development world.... A timely blast against the complacency
of those who think progress and prosperity can be detached from politics."—Guardian (UK)

"Easterly's message
is simple: Before you offer a helping hand, look hard at the core beliefs that
brought you good fortune."—Washington Post

"There is something indomitable about William Easterly, and he has struck the development establishment where it is weakest: its appalling human rights record."—Los Angeles Times Book Review

"Easterly is one of the most consistently interesting and provocative thinkers on development."—Bloomberg View

"A passionate, if fitful, argument against the conventional approach to economic development."—Washington Post

"Easterly has written a book that grabs a reader's attention from the first sentence.... Highly recommended."—Choice

"The Tyranny of Experts is intellectual comfort food for people ... who are skeptical of the idea that the only things standing between us and a world free of poverty are insufficient funding and political will."—Cato Institute's Regulation

"Easterly delivers a scathing assault on the anti-poverty programs
associated with both the United Nations and its political and private sector
supporters.... A sharply written polemic intended to stir up debate about the
aims of global anti-poverty campaigns"—Kirkus

"Easterly's research may help start a dialog about identifying better methods for alleviating global poverty and should assist readers interested in humanitarian efforts who want to draw their own conclusions about how to aid the world's poor."—Library Journal