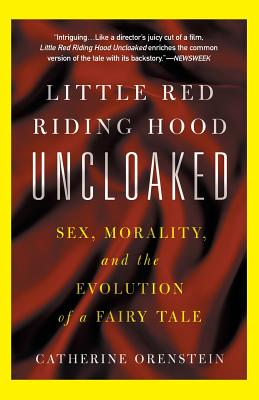 
Not On Our Shelves—Ships in 1-5 Days
In Little Red Riding Hood Uncloaked Catherine Orenstein reveals for the first time the intricate sexual politics, moral ambiguities and philosophical underpinnings of Red Riding Hood's epic journey to Grandmother's house -- and how, from the nursery on, the story influences our view of the world. Beginning with its first publication as a cautionary tale on the perils of seduction, written in reaction to the licentiousness of the court of Louis XIV, Orenstein traces the many and various lives the tale has lived since then, from its appearance in modern advertisements for cosmetics and automobiles to the inspiration it brought to poets like Anne Sexton and its starring role in pornographic films. In Little Red Riding Hood Uncloaked, Red appears as seductress, hapless victim, riot grrrrl, femme fatale, and even she-wolf, as Orenstein shows how, through centuries of different guises, the story has served as a barometer of social and sexual mores pertaining to women. Full of fascinating history, generous wit, and intelligent analysis, Little Red Riding Hood Uncloaked proves that the story of one young girl's trip through the woods continues to be one of our most compelling modern myths.
Catherine Orenstein is a writer whose work has appeared in the Washington Post, the San Francisco Examiner, Ms., the New York Times Op-Ed page, and other publications. She graduated magna cum laude from Harvard University, where the idea for Little Red Riding Hood Uncloaked began as her senior thesis. She lives in New York City.