Who Really Cares: The Surprising Truth About Compassionate Conservatism -- America's Charity Divide -- Who Gives, Who Doesn't, and Why It Matters (Paperback) 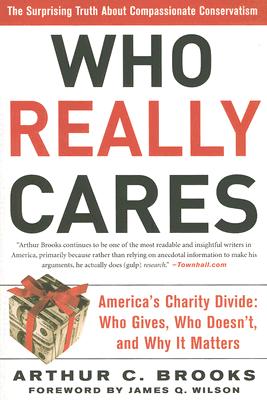 Who Really Cares: The Surprising Truth About Compassionate Conservatism -- America's Charity Divide -- Who Gives, Who Doesn't, and Why It Matters (Paperback)


Not On Our Shelves—Ships in 1-5 Days
We all know we should give to charity, but who really does? In his controversial study of America's giving habits, Arthur C. Brooks shatters stereotypes about charity in America-including the myth that the political Left is more compassionate than the Right. Brooks, a preeminent public policy expert, spent years researching giving trends in America, and even he was surprised by what he found. In Who Really Cares, he identifies the forces behind American charity: strong families, church attendance, earning one's own income (as opposed to receiving welfare), and the belief that individuals-not government-offer the best solution to social ills. But beyond just showing us who the givers and non-givers in America really are today, Brooks shows that giving is crucial to our economic prosperity, as well as to our happiness, health, and our ability to govern ourselves as a free people.
Arthur C. Brooks is President of the American Enterprise Institute, a public policy think tank in Washington, DC. He is the author of nine books, including The Battle, Gross National Happiness, and Who Really Cares. Until 2009, Brooks was the Louis A. Bantle Professor of Business and Government Policy at Syracuse University.

Previously, Brooks spent twelve years as a professional French hornist with the City Orchestra of Barcelona and other ensembles. He is a native of Seattle and currently lives in Bethesda, Maryland, with his wife Ester and their three children.