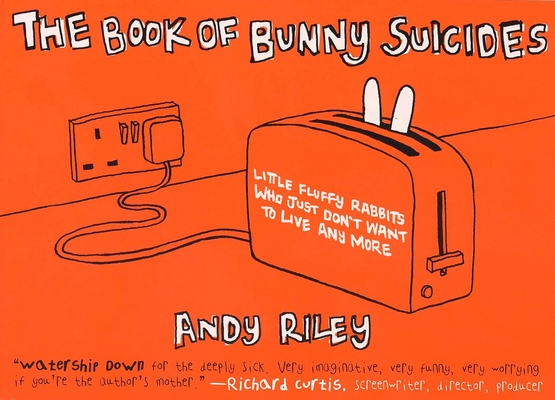 
Backordered
Illustrated in a stark and simple style, The Book of Bunny Suicides is a collection of hilarious and outrageous cartoons that makes the perfect gift for anyone in touch with their dark side.

Rabbits. We'll never quite know why, but sometimes they decide they've just had enough of this world—and that's when they start getting inventive. This cult hit and international bestseller follows over one hundred bunnies as they find ever more outlandish ways to do themselves in. From an encounter with the business end of Darth Vader's lightsaber, to supergluing themselves to a diving submarine, to hanging around underneath a loose stalactite, these bunnies are serious about suicide.
Andy Riley is a scriptwriter for television and film. His credits include Trigger Happy TV, Smack the Pony, Black Books, the British Academy of Film and Television Arts award-winning Robbie the Reindeer, and the Disney animated film Gnomeo and Juliet—with a score by Tim Rice and Elton John.  He draws a weekly comic strip called “Roasted” for The Observer magazine.
Praise for Andy Riley

“It's the funniest, bunniest book I've ever read!”—Elton John

“Brilliantly researched—one of the most important books of the year.”—Hugh Grant

“At last, a British Gary Larson. But without the other animals.”—David Baddiel, author of The Death of Eli Gold

“If you are a bunny contemplating suicide, then this is the book for you.”—Paul Whitehouse, comedian

“The most moving account of rabbit-related depression I can recall reading. It will stay with me in my toilet for a long, long time.”—Alex Buxton, co-creator of The Adam and Joe Show

“A guilty pleasure of twisted humor in the Monty Python vein.”—Chicago Tribune