The Good Black: A True Story of Race in America (Paperback) 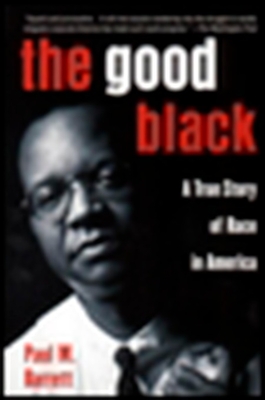 The Good Black: A True Story of Race in America (Paperback)


Special Order—Subject to Availability
Larry Mungin spent his life preparing to succeed in the white world. He looked away from racial inequality and hostility, believing he'd make it if he worked hard and played by the rules. He rose from a Queens housing project to Harvard Law School, and went on to practice law at major corporate firms. But just at the point when he thought he'd make it, when he should have been considered for partnership, he sued his employer for racial discrimination. The firm claimed it went out of its way to help Larry because of his race, while Larry thought he'd been treated unfairly. Was Larry a victim of racial discrimination, or just another victim of the typical dog-eat-dog corporate law culture? A thought-provoking courtroom drama with the fast pace of a commercial novel, The Good Black asks readers to rethink their ideas about race and is a fascinating look at the inner workings of the legal profession.
Paul M. Barrett is an assistant managing editor and senior writer at Businessweek. He is the author of the New York Times bestseller Glock: The Rise of America's Gun, American Islam: The Struggle for the Soul of a Religion, and The Good Black: A True Story of Race in America. Barrett lives and works in New York City.
“Superb and provocative… It will rivet anyone wondering why the struggle to racially integrate Corporate America has made such scant progress.”—David Segal, Washington Post

“Like Grisham, Barrett has a knack for writing dramatically about lawyers and their world. What haunts this reader is the sadness of a man who spent his life trying to be ‘a good black.’”—Newsweek

“An emotional roller coaster… Should serve as a wake-up call for those who have ignored the wide gulf between blacks and whites in the American workforce.”—Lawrence Otis Graham, author of Our Kind of People and Member of the Club

“Barrett has written a fascinating racial Rashomon story. With unusual empathy and evenhandedness, Barrett illuminates the complicated workings of race in a middle-class, post-civil rights society—while at the same time spinning an absorbing courtroom yarn.”—Nicholas Lemann, author of The Promised Land

“A morality tale with a twist… Has the power to unsettle us and our self-congratulatory expectations.”—Denver Post

“A remarkably clear portrait… part case comment, part biography, and part snapshot of race relations at the end of the twentieth century.”—Harvard magazine

“Powerful and poignant.”—David J. Garrow, author of Bearing the Cross

“Raises all the right questions… paints an intimate picture… illustrates one of the modern-day iterations of the debate about race.”—Chicago Tribune

“An important story… No one who cares about the future of black-white relations in this country can afford to ignore its lessons.”—Charles Lane, editor, The New Republic

“The Good Black really is The Firm… Illuminates not only the avarice at the core of modern law practice but the never-ending ambiguities of race.”—Jeffrey Toobin, author of The Run of His Life: The People v. O.J. Simpson