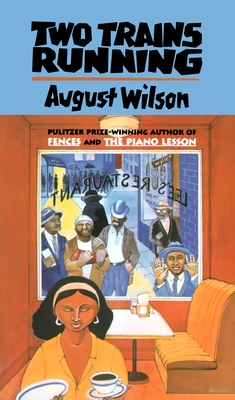 
On Our Shelves Now at:
From the Pulitzer Prize-winning author of Fences and The Piano Lesson comes a “vivid and uplifting” (Time) play about unsung men and women who are anything but ordinary.

August Wilson established himself as one of our most distinguished playwrights with his insightful, probing, and evocative portraits of Black America and the African American experience in the twentieth century. With the mesmerizing Two Trains Running, he crafted what Time magazine called “his most mature work to date.”

It is Pittsburgh, 1969, and the regulars of Memphis Lee’s restaurant are struggling to cope with the turbulence of a world that is changing rapidly around them and fighting back when they can. The diner is scheduled to be torn down, a casualty of the city’s renovation project that is sweeping away the buildings of a community, but not its spirit. For just as sure as an inexorable future looms right around the corner, these people of “loud voices and big hearts” continue to search, to father, to persevere, to hope. With compassion, humor, and a superb sense of place and time, Wilson paints a vivid portrait of everyday lives in the shadow of great events.
August Wilson was a major American playwright whose work has been consistently acclaimed as among the finest of the American theater. His first play,Ma Rainey's Black Bottom, won the New York Drama Critics' Circle Award for best new play of 1984-85. His second play, Fences, won numerous awards for best play of the year, 1987, including the Tony Award, the New York Drama Critics' Circle Award, the Drama Desk Award, and the Pulitzer Prize. Joe Turner's Come and Gone, his third play, was voted best play of 1987-1988 by the New York Drama Critics' Circle. In 1990, Wilson was awarded his second Pulitzer Prize for The Piano Lesson. He died in 2005.
Winner of the New York Drama Critics Circle Best Play Award

“A symphonic composition with a rich lode of humanity running through it.”—Los Angeles Times

“His language is golden: rich in humor and poetry and redolent of a colorful vernacular.”—Wall Street Journal

“Has an unassailable authenticity… a lot of life and a lot of humor… By the end, a small world has been utterly transformed.”—Variety

“These characters are fully imagined—they live… reeling out stories about their past, their angers, their dreams.”—Washington Post

“Wilson’s most adventurous and honest attempt to reveal the intimate nature of history… glorious storytelling… touching and often funny… a penetrating revelation of a world hidden from view.”—Frank Rich, The New York Times