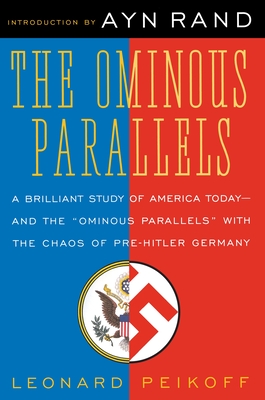 
Special Order—Subject to Availability
Ayn Rand chose Leonard Peikoff to be her successor as the spokesman for Objectivism. And in this brilliantly reasoned, thought-provoking work we learn why, as he demonstrates how far America has been detoured from its original path and led down the same road that Germany followed to Nazism. Self-sacrifice, Oriental mysticism, racial "truth," the public good, doing one's duty—these are among the seductive catch-phrases that Leonard Peikoff dissects, examining the kind of philosophy they symbolize, the type of thinking that lured Germany to its doom and that he says is now prevalent in the United States. Here is a frightening look at where America may be heading, a clarion call for all who are concerned about preserving our right to individual freedom.
Leonard Peikoff is the preeminent Ayn Rand scholar writing today. He worked closely with Rand in New York City for thirty years and was designated by her as heir to her estate. He has taught philosophy at several places, including Hunter College and New York University. Dr. Peikoff is the author of The DIM Hypothesis: Why the Lights of the West Are Going Out and The Cause of Hitler’s Germany. He grew up in Western Canada and now lives in Southern California. He also hosted the national radio talk show "Philosophy: Who Needs It."
Praise for Leonard Peikoff

“Offers a truly revolutionary idea…The book is clear, tight, disciplined, beautifully structured, and brilliantly reasoned. Its style is clear and hard as crystal—and as sparkling… As to my personal reaction, I can express it best by paraphrasing a line from Atlas Shrugged: ‘It’s so wonderful to see a great, new, crucial achievement which is not mine!’”—Ayn Rand

“Extraordinarily perceptive…frightening insights…Everyone concerned with the collectivist trend in today’s world should read this book.”—Alan Greenspan

“A revelation...Peikoff is an extraordinary communicator...He brings the most difficult intellectual ideas within the grasp of the general reader.”—Detroit Free Press