The Anti-Federalist Papers and the Constitutional Convention Debates (Mass Market) 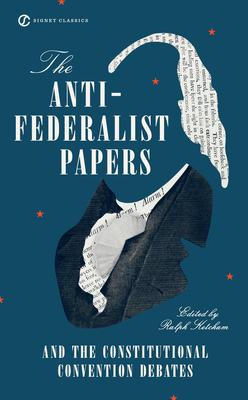 The Anti-Federalist Papers and the Constitutional Convention Debates (Mass Market)


Not On Our Shelves—Ships in 1-5 Days
The complete texts of the documents that tell the story of the clashes and compromises that gave birth to the Unites States of America.

Should the members of the government be elected by direct vote of the people?
Should the government be headed by a single executive, and how powerful should that executive be? Should immigrants be allowed into the United States?
How should judges be appointed?
What human rights should be safe from government infringement?

In 1787, these important questions and others were raised by such statesmen as Patrick Henry and John DeWitt as the states debated the merits of the proposed Constitution. Along with The Federalist Papers, this invaluable book documents the political context in which the Constitution was born.

This volume includes the complete texts of the Anti-Federalist Papers and Constitutional Convention debates, commentaries, and an Index of Ideas. It also lists cross-references to its companion volume, The Federalist Papers, available in a Signet Classic edition.

Edited and with an Introduction by Ralph Ketchum
Ralph Ketchum is Professor of History and Political Science at the Maxwell School of Citizenship and Public Affairs of Syracuse University. He is the author of many books on American History, including Presidents Above Party: The First American Presidency; From Colony to Country: The Revolution in American Thought, 1750-1820; and James Madison: A Biography.