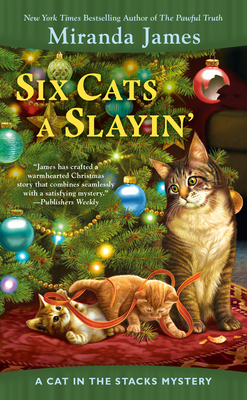 
Special Order—Subject to Availability
Charlie Harris and his Maine Coon cat, Diesel, are busy decking the halls for the holidays when an unexpected delivery and a shocking murder conspire to shake up the season in this latest installment of the New York Times bestselling series.

December twenty-fifth is right around the corner, and Charlie is making his list and checking it twice. He is doing his best to show some peace and goodwill toward his nosy neighbor Gerry Arbitron, a real estate agent who seems to have designs on his house (and maybe on him, as well), while preparing for a very important role, indeed--his first Christmas as a grandfather.

The last thing Charlie expects is to gain several new additions to his family. Charlie finds a box on his doorstep with five kittens inside and a note begging him to keep them safe. With Diesel's help, Charlie welcomes the tiny felines into the Harris household just as Gerry decides it is time to throw a lavish holiday party.

Determined to make her mark on Athena, Gerry instead winds up dead at her very own party. Though attempts to dig into her past come up empty, Charlie and his girlfriend, Helen Louise, witness two heated exchanges involving Gerry before her death: one with a leading citizen and another with the wife of a good friend. Will one of these ladies wind up on the sheriff's naughty list? Charlie and Diesel have to wrap up the case before the special season is ruined by a sinister scrooge.
Miranda James is the New York Times bestselling author of the Cat in the Stacks Mysteries, including Claws for Concern, Twelve Angry Librarians, and No Cats Allowed as well as the Southern Ladies Mysteries, including Fixing to Die, Digging Up the Dirt, and Dead with the Wind. James lives in Mississippi.
Praise for the New York Times bestselling Cat in the Stacks Mysteries

"Combines a kindhearted librarian hero, family secrets in a sleepy Southern town, and a gentle giant of a cat that will steal your heart."--Lorna Barrett, New York Times bestselling author of the Booktown Mysteries

"James should soon be on everyone's list of favorite authors."--Leann Sweeney, New York Timesbestselling author of the Cats in Trouble Mysteries

"Every single time I turned out my light for the night, I found myself thinking about the story, flipping the light switch again and reading just 'one more chapter,' until I reached the satisfying conclusion. Run, don't walk, to get your copy today!!"--Myshelf.com

"Ideal for Christie fans who enjoy a good puzzle."--Library Journal

"Humor and plenty of Southern charm...Cozy fans will hope James will keep Charlie and Diesel in action for years to come."--Publishers Weekly