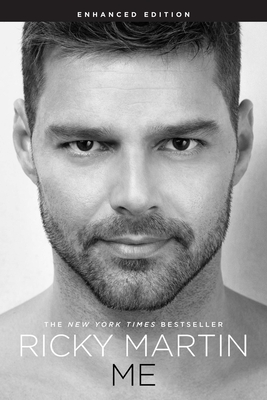 In this New York Times bestseller, international superstar Ricky Martin, who has sold more than 60 million albums worldwide, opens up for the first time about memories of his early childhood, experiences in the famed boy band Menudo, struggles with his identity during the Livin' la Vida Loca phenomenon, reflections on coming to terms with his sexuality, relationships that allowed him to embrace love, and life-changing decisions like devoting himself to helping children around the world, and becoming a father. Me is an intimate memoir about the very liberating and spiritual journey of one of the most iconic pop-stars of our time.

Joining Latin pop group Menudo at the age of 12 as lead singer, Martin had scored countless #1 singles globally prior to making his mark in the US with his worldwide hit, "Livin' La Vida Loca." Throughout his 25-year musical career, he has sold over 60 million albums and has won numerous GRAMMY awards, American Music Awards and Billboard Awards. Martin is also a devoted humanitarian, having established The Ricky Martin Foundation. He lives between Miami and San Juan, Puerto Rico.En Español:

"In the process of revealing the human being behind the artist, Ricky Martin offers us a testimonyof exemplary honesty and greatness of soul. While I was reading, I remembered averse from the Persian poet Hafez, ‘Not even seven thousand years of joy can justify sevenyears of repression.’"—Paulo Coelho

"Ricky Martin has written an extraordinary memoir, the story of a tortured soul who healedhimself by returning to the state of innocence and authenticity. His story will speak to you,because it is, in a sense, the story of humanity—of the sacred and the profane, of forbidden lust and unconditional love. It takes courage to be so ruthlessly honest and transparent, but it is only this kind of courage and this kind of love that can heal the world. Bravo!"—Deepak Chopra, M.D.