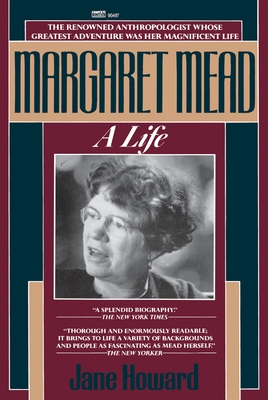 
Not On Our Shelves—Ships in 1-5 Days
“Engaging . . . a fine biography that gets beyond the public icon to a portrait of the real woman.”—Chicago Sun-Times

At the age of twenty-three, in the 1920s, Margaret Mead traveled alone to the South Sea and wrote of adolescent sexuality and guilt-free love in her now classic Coming of Age in Samoa. For the next half-century, Mead would act as a powerful participant and opinion maker in the largest issues of her time: culture and religion, education and child rearing, sex and freedom, world hunger, war, and the politics of peace.

Outrageous and extravagant, Mead was, in every sense of the word, spirited. Friendships and families of many kinds were at the core of her personal life, and she was both loyal and demanding with people, always challenging them to move in new directions.

An inveterate world traveler, a teacher at Columbia University, and curator of The Museum of Natural History, Mead wrote thirty-four books, made ten films, and was granted twenty-eight honorary degrees and numerous awards. This intimate and fascinating story is an astonishing record of the personal and scientific life of an extraordinary human being.

“Mead was, as Miss Howard’s abundantly and unfailing lively account shows, a very American individual. . . . Miss Howard writes not as an anthropologist but as the superb reporter she is.”—The Wall Street Journal

“A triumph of industry, imagination, and literary grace.”—The Washington Post
Jane Howard was an an educator, a journalist, and the author of the iconic biography Margaret Mead: A Life. She died in 1996.