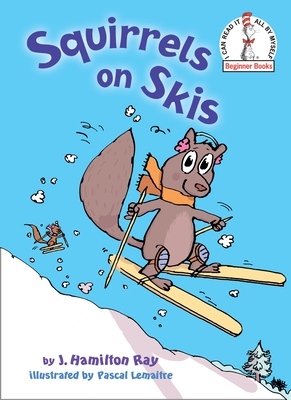 
Not On Our Shelves—Ships in 1-5 Days
This new Beginner Book about manic skiing squirrels—by J. Hamilton Ray with illustrations by Pascal Lemaitre—has the feeling of an old classic read-aloud. "Nobody knew how the mania grew. First there was one, and then there were two. Three more came gliding from under the trees. LOOK! On the hill. Those are squirrels on skis! Below lay the town, snow-covered and still. Not a sound could be heard. All was silent, until . . . Swwwishhhh swooped the skiers, all dressed for play. Eighty-five squirrels and more on the way!" As you can imagine, the townsfolk are NOT amused. Can intrepid reporter Sally Sue Breeze find out where the squirrels are getting their skis-and make them stop skiing long enough to eat lunch-before pest-control guy Stanley Powers sucks them up in his vacuum device? (Don't worry—Sally triumphs in a most unexpected way.) With delightfully understated, funny illustrations by Pascal Lemaitre, this is the perfect book for beginning readers to curl up and chill out with on a snow day—or any day!

Originally created by Dr. Seuss, Beginner Books encourage children to read all by themselves, with simple words and illustrations that give clues to their meaning.
J. HAMILTON RAY is a children's television writer and producer. He's won two Emmy Awards for Outstanding Writing for Children, and among the many programs he has written for and produced is the hit PBS Kids television show Between the Lions. He has also produced animated videos of picture books, among them many by Dr. Seuss and P. D. Eastman. He and his wife—the novelist C. A. Belmond—divide their time between the woods of Redding, CT. (where the squirrel-watching is great), and France. Squirrels on Skis is his first book.