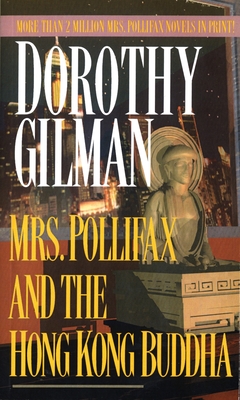 This is book number 7 in the Mrs. Pollifax series.

"Like the proverbial first potato chip [this book] gives you an irresistible craving for the first six Mrs. Pollifax books."
Newport News DAILY PRESS
Although recently married, Mrs. Pollifax is packed and ready to go to China, where a young agent, Sheng Ti, holds the answers to goings on at the sinister Feng Imports--a one-time agency front. Only Mrs. Pollifax has earned Sheng's trust, and only she can possibly stop what turns out to be a frightening and ominous plot involving drugs, smuggled diamonds, a famous cat burglar turned Interpol agent, a mysterious psychic, and, of course, murder.....possibly her own!
Dorothy Gilman (1923–2012) was the author of 14 Mrs. Pollifax novels, including The Unexpected Mrs. Pollifax, the series debut; Mrs. Pollifax Pursued; Mrs. Pollifax and the Lion Killer; Mrs. Pollifax, Innocent Tourist; and Mrs. Pollifax Unveiled. She was also the author of many other novels, among them Thale’s Folly.