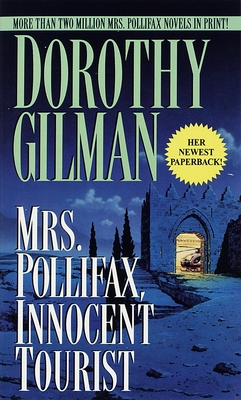 This is book number 13 in the Mrs. Pollifax series.

Working with her retired CIA friend John Farrell, Mrs. Pollifax must smuggle a manuscript out of Jordan, a document that encodes the shocking truth of Saddam Hussein's reign.

Hardly are the two airborne when the coils of Middle Eastern intrigue begin to unwind. Mrs. Pollifax's seatmate is not the affable Arab businessman he pretends to be. It is not imagination that persuades Mrs. P. that wherever they go, she and Farrell are followed. To elude their pursuers in such a politically volatile country isn't easy. In fact, it can be downright deadly. . . .
Dorothy Gilman is the author of twelve earlier Mrs. Pollifax novels, including The Unexpected Mrs. Pollifax (the series debut), The Amazing Mrs. Pollifax, Mrs. Pollifax Pursued, and Mrs. Pollifax and the Lion Killer.