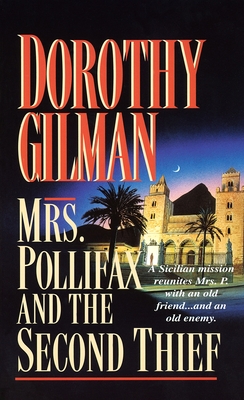 This is book number 10 in the Mrs. Pollifax series.

The assignment is a snap: Mrs. Pollifax just has to shoot some pictures at a quiet funeral outside Washington and take them to Sicily, where her old friend Farrell -- a former CIA agent turned art dealer -- anxiously awaits them.
But like all Mrs. P's assignments, so ostensibly suitable for the CIA's favorite garden club member, this one quickly turns lethal. Her welcoming committee in Palermo includes a most unlikely CIA agent and several unseen enemies. Unfriendly eyes also observe Mrs. P's rendezvous with Farrell in a secluded mountain village and weapons are soon displayed. With mysterious forces hot after them, she and Farrell scurry for safety to a fortified country villa, where the bizarre chatelaine, once a star on Madison Avenue, is almost as unnerving as the dangers she's protecting them from.
So, though the sun shines brightly, the food is delicious, and romance is in the air, Mrs. Pollifax is too busy handing out karate chops and playing catch-me-if-you-can with an assassin to enjoy the amenities . . . .
"Mrs. Pollifax gives Agatha Christie's Miss Marple a rival to reckon with." -- The Toronto Star
Dorothy Gilman (1923–2012) was the author of 14 Mrs. Pollifax novels, including The Unexpected Mrs. Pollifax, the series debut; Mrs. Pollifax Pursued; Mrs. Pollifax and the Lion Killer; Mrs. Pollifax, Innocent Tourist; and Mrs. Pollifax Unveiled. She was also the author of many other novels, among them Thale’s Folly.