Where Is Mount Everest? (Where Is?) (Paperback) 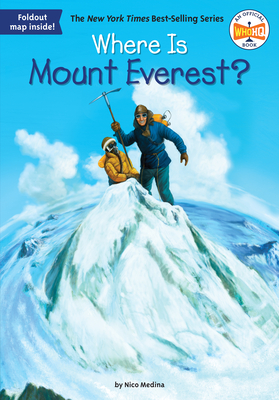 Where Is Mount Everest? (Where Is?) (Paperback)


Not On Our Shelves—Ships in 1-5 Days
As the recent deaths of sixteen Sherpas underscore, climbing Mount Everest remains a daunting challenge. Located in the Himalayas, Everest is the highest mountain in the world at a whopping 29,028 feet. In this compelling narrative, Nico Medina guides readers through the mountain’s ancient beginnings, first human settlers, historic climbs, and the modern commercialization of mountain-climbing. With stories of expeditions gone wrong and miraculously successful summit climbs, this is a thrilling addition to the Where Is? series!
Nico Medina is the author of Who Was Julius Caesar? and Who Was Genghis Khan?, as well as two YA novels. He works at a publishing house in New York City and lives in Brooklyn.