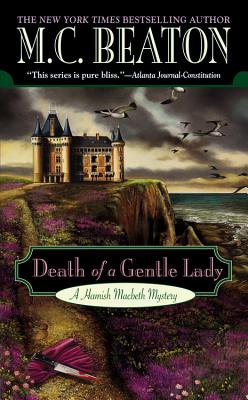 This is book number 24 in the A Hamish Macbeth Mystery series.

Death of a Gentle Lady: A Hamish Macbeth Mystery

Gentle by name, gentle by nature. Everyone in the sleepy Scottish town of Lochdubh adores elderly Mrs. Gentle - everyone but Hamish Macbeth, that is. Hamish thinks the gentle lady is quite sly and vicious, and the citizens of Lochdubh think he is overly cranky. Perhaps it's time for him to get married, they say.

But who has time for marriage when there's a murder to be solved? When Mrs. Gentle dies under mysterious circumstances, the town is shocked and outraged. Chief Detective Inspector Blair suspects members of her family, but Hamish Macbeth thinks there's more to the story, and begins investigating the truth behind this lady's gentle exterior.
M. C. Beaton has won international acclaim for her New York Times bestselling Hamish Macbeth mysteries. The BBC has aired 24 episodes based on the series. Beaton is also the author of the bestselling Agatha Raisin series, which will air as an eight-episode dramatic series on Sky1, starring Ashley Jensen. She lives in the Cotswolds with her husband. For more information, you can visit MCBeaton.com.
"This series is pure bliss."—Atlanta Journal-Constitution

"Longing for escape? Tired of waiting for Brigadoon to materialize? Time for a trip to Lochdubh, the scenic, if somnolent, village in the Scottish Highlands where M.C. Beaton sets her beguiling whodunits featuring Constable Hamish Macbeth."—New York Times