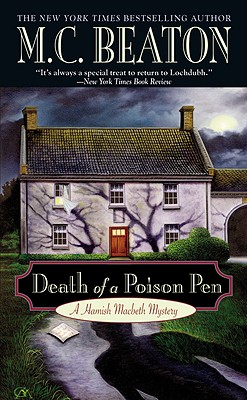 This is book number 19 in the A Hamish Macbeth Mystery series.

Death of a Poison Pen: A Hamish Macbeth Mystery

When the residents of Lochdubh begin receiving poison pen letters, no one takes them seriously. But Constable Hamish Macbeth fears them, and his instincts prove correct when the postmistress is found hanging from a rope with a vicious poison pen letter at her feet.
M. C. Beaton has won international acclaim for her New York Times bestselling Hamish Macbeth mysteries. The BBC has aired 24 episodes based on the series. Beaton is also the author of the bestselling Agatha Raisin series, which will air as an eight-episode dramatic series on Sky1, starring Ashley Jensen. She lives in the Cotswolds with her husband. For more information, you can visit MCBeaton.com.