Death of an Addict (A Hamish Macbeth Mystery #15) (Mass Market) 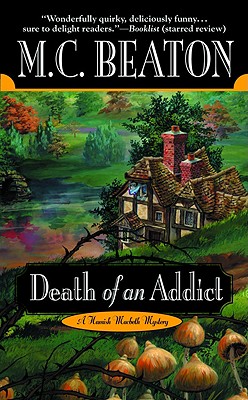 Death of an Addict (A Hamish Macbeth Mystery #15) (Mass Market)

This is book number 15 in the A Hamish Macbeth Mystery series.

From the author of the Agatha Raisin television series...DEATH OF AN ADDICT: A Hamish Macbeth MysteryFormer drug addict Tommy Jarret rents a Scottish chalet to check out reports of a sea monster. But when he is found dead of an apparent drug overdose, constable Hamish Macbeth suspects foul play. Teaming with Glasgow Detective Inspector Olivia Chater, Macbeth goes undercover and dives into the underworld to root out a cartel secretly entrenched in the Highlands.
M. C. Beaton has won international acclaim for her New York Times bestselling Hamish Macbeth mysteries. The BBC has aired 24 episodes based on the series. Beaton is also the author of the bestselling Agatha Raisin series, which will air as an eight-episode dramatic series on Sky1, starring Ashley Jensen. She lives in the Cotswolds with her husband. For more information, you can visit MCBeaton.com.