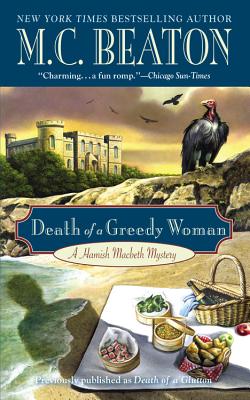 This is book number 8 in the A Hamish Macbeth Mystery series.

Death of a Greedy Woman: A Hamish Macbeth Mystery

There's not a cloud in Constable Hamish Macbeth's sky, just plenty of warm sunshine and not quite enough of beautiful Priscilla Halburton-Smythe. But as eight hopeful members of the Checkmate Singles Club converge on Tommel Castle Hotel for a week of serious matchmaking, the clouds roll in. The four couples, carefully matched by dating director Maria Worth, immediately dislike each other. The arrival of Maria's gross, greedy partner, Peta, kills the last vestige of romance. And as love goes out the window, murder comes in the door. Peta soon slurps up her last meal, and Hamish is left with a baffling puzzle: Who shared the fateful outing that left Peta dead with a big red apple in her mouth? Surely not of those singles...
M. C. Beaton has won international acclaim for her New York Times bestselling Hamish Macbeth mysteries. The BBC has aired 24 episodes based on the series. Beaton is also the author of the bestselling Agatha Raisin series, which will air as an eight-episode dramatic series on Sky1, starring Ashley Jensen. She lives in the Cotswolds with her husband. For more information, you can visit MCBeaton.com.