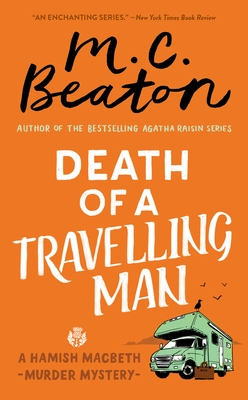 This is book number 9 in the A Hamish Macbeth Mystery series.

Death of a Traveling Man: A Hamish Macbeth Mystery

Lochdubh constable Hamish Macbeth's life is going to pot. He has-horrors!-been promoted, his new boss is a dunce, and a self-proclaimed traveler named Sean and his girlfriend have parked their rusty eyesore of a van in the middle of the village. Hamish smells trouble, and he's right as usual. The doctor's drugs go missing. Money vanishes. Neighbors suddenly become unneighborly. The tension only explodes after the itinerant Sean is found brutally beaten to death. Suspicion quickly falls on his girlfriend, but with nobody willing to talk, the canny Hamish faces the tough task of worming the facts out of the villagers. As he uncovers a bizarre story around the murdered traveler, Macbeth knows he must find the truth soon, before the killer gets away for good.
M. C. Beaton has won international acclaim for her New York Times bestselling Hamish Macbeth mysteries. The BBC has aired 24 episodes based on the series. Beaton is also the author of the bestselling Agatha Raisin series, which will air as an eight-episode dramatic series on Sky1, starring Ashley Jensen. She lives in the Cotswolds with her husband. For more information, you can visit MCBeaton.com.