Death of a Valentine (A Hamish Macbeth Mystery #25) (Mass Market) 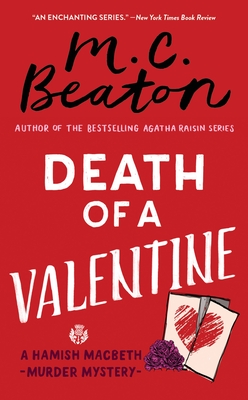 Death of a Valentine (A Hamish Macbeth Mystery #25) (Mass Market)

This is book number 25 in the A Hamish Macbeth Mystery series.

Death of a Valentine: A Hamish Macbeth Mystery

Amazing news has spread across the Scottish countryside. The most famous of highland bachelors, police sergeant Hamish Macbeth, will be married at last. Everyone in the village of Lochdubh adores Josie McSween, Macbeth's newest constable and blushing bride-to-be.

While locals think Josie is quite a catch, Hamish has a case of prenuptial jitters. After all, if it weren't for the recent murder of a beautiful woman in a neighbouring village, there wouldn't be a wedding at all. For it was a mysterious Valentine's Day package--delivered to the victim before her death--that initially drew Hamish and Josie together on the investigation. As they work side by side, Hamish and Josie soon discover that the woman's list of admirers was endless, confirming Hamish's suspicion that love can be blind, deaf . . . and deadly.
M. C. Beaton has won international acclaim for her New York Times bestselling Hamish Macbeth mysteries. The BBC has aired 24 episodes based on the series. Beaton is also the author of the bestselling Agatha Raisin series, which will air as an eight-episode dramatic series on Sky1, starring Ashley Jensen. She lives in the Cotswolds with her husband. For more information, you can visit MCBeaton.com.