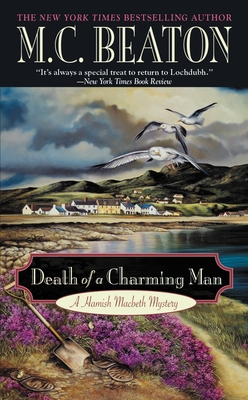 This is book number 10 in the A Hamish Macbeth Mystery series.

From the author of the Agatha Raisin television series...DEATH OF A CHARMING MAN: A Hamish Macbeth MysteryAll Sergeant Hamish Macbeth wants to do is fish and drink coffee with his fiance. Then a mysterious stranger moves into the neighboring village--a rich, unmarried heartbreaker, causing rivalry among the local women. It is amusing until death threats, assault and murder shatter the tranquil countryside. Hamish must investigate the darker side of love and desire.
M. C. Beaton has won international acclaim for her New York Times bestselling Hamish Macbeth mysteries. The BBC has aired 24 episodes based on the series. Beaton is also the author of the bestselling Agatha Raisin series, which will air as an eight-episode dramatic series on Sky1, starring Ashley Jensen. She lives in the Cotswolds with her husband. For more information, you can visit MCBeaton.com.