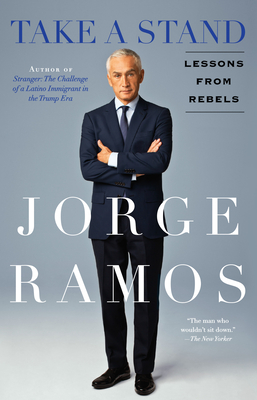 After 30 fascinating years uncovering the hard truth, journalist Jorge Ramos opens up for the first time about life-altering lessons by sharing captivating never-before-told stories. Widely recognized for his unapologetic, no-holds-barred approach to interviewing global leaders, business titans, democratic policy makers, and dictators, Ramos unearths their one common trait—they were all rebels at one point in their lives.

Rebels are different. They decided to challenge the prevailing status quo. Sometimes they rebelled to change a regime, other times to prevent abuse or discrimination, but in most cases they strived to correct an injustice.

Candid and at times controversial, Ramos draws invaluable awareness of issues that influence the mindset of the largest minority in the country—Latinos—and how they will undoubtedly shape not only Presidential elections but also the future of America.
Jorge Ramos is an Emmy Award-winning journalist, syndicated columnist, and the author of ten books. Hailed by Time magazine as one of “the 25 most influential Hispanics in the United States,” Ramos has been the anchorman for Noticiero Univision since 1986. He also hosts the weekly show America with Jorge Ramos and the Sunday morning public affairs show Al Punto on Fusion. In 2017, he was awarded the Walter Cronkite Award in the US and the Gabriel Garcia Marquez prize in Colombia for his excellence in journalism.