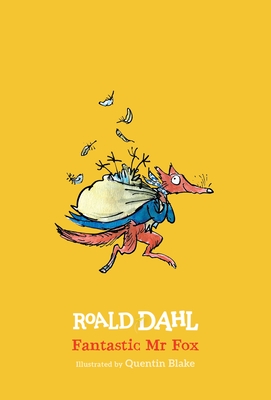 
Special Order—Subject to Availability
This collectable hardcover edition will feature a beautiful cover and deluxe packaging, including red interior text and illustrations!

From the bestselling author of Charlie and the Chocolate Factory and The BFG. Someone's been stealing from the three meanest farmers around, and they know the identity of the thief—it's Fantastic Mr. Fox! Working alone they could never catch him; but now fat Boggis, squat Bunce, and skinny Bean have joined forces, and they have Mr. Fox and his family surrounded. What they don't know is that they're not dealing with just any fox—Mr. Fox would rather die than surrender. Only the most fantastic plan can save him now.
Roald Dahl was a spy, ace fighter-pilot, chocolate historian and medical inventor. He was also the author of Charlie and the Chocolate Factory, Matilda, The BFG and many more brilliant stories. He remains the World’s No.1 storyteller.

Sir Quentin Blake, the first-ever Children’s Laureate of the United Kingdom, has illustrated nearly 300 books, including most of Roald Dahl’s children’s books. He lives in London.