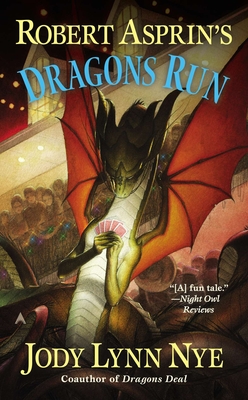 
Not On Our Shelves—Ships in 1-5 Days
In New York Times bestselling author Robert Asprin and Jody Lynn Nye’s newest Big Easy dragon tale, Griffen McCandles is about to give the forces of evil a run for their money…

Griffen already has his hands full running his gambling operation in New Orleans and dealing with his dragon heritage. Now his pregnant sister, Valerie, is missing—possibly kidnapped—and his uncle, Malcolm McCandles, has flown into town for a mysterious meeting with a powerful man who’s been dead for almost eight decades.

And Griffen certainly hasn’t got the time to protect Representative Penny Dunbar, a dragon who’s running for governor of Louisiana—if malign forces don’t take her out first. Griffen learned a long time ago to play the hand fate has dealt him, but with many lives at stake—including Val’s unborn dragon—he’s hoping for an ace in the hole…
Jody Lynn Nye is an established science fiction and fantasy author who collaborated with Robert Asprin on the DRAGONS WILD novel, Dragons Deal and on seven MYTH books, including Myth-Fortunes, Myth-Chief, and Myth-Gotten Gains. She is also the author of Robert Asprin's Myth-Quoted.

Robert Asprin was the New York Times bestselling author of the MYTH, PHULE'S COMPANY and DRAGONS WILD series. He passed away in May of 2008 in his hometown of New Orleans.
Praise for Dragons books by Robert Asprin and Jody Lynn Nye:

“Asprin tackles a new kind of comic fantasy…featuring a likable rake and plenty of action and quirky humor.”—Library Journal

“Joyous fantasy with continuous action and a creative cast of characters.”—SFRevu