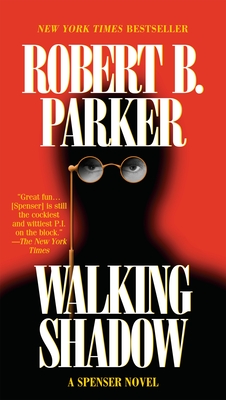 By Robert B. Parker

This is book number 21 in the Spenser series.

A murder draws Boston PI Spenser into the dramatic world of theater in this New York Times bestseller in Robert B. Parker’s long-running series.

In a shabby waterfront town, an actor is shot dead onstage. Granted, the script left much to be desired. But there's more behind the scenes than an overzealous critic—and Spenser and Hawk are combing Port City’s underworld to find it...

“Great fun...[Spenser] is still the cockiest and wittiest P.I. on the block.”—The New York Times
Robert B. Parker was the author of seventy books, including the legendary Spenser detective series, the novels featuring Police Chief Jesse Stone, and the acclaimed Virgil Cole–Everett Hitch westerns, as well as the Sunny Randall novels. Winner of the Mystery Writers of America Grand Master Award and long considered the undisputed dean of American crime fiction, he died in January 2010.
Praise for Walking Shadow

“Will captivate both longtime and soon-to-be devoted Spenser lovers.”—Kirkus Reviews

“The opening premise is particularly delicious...neat jolts of action, crisp, witty dialogue, the signature understated, deadpan zingers that Spenser and Hawk toss off so effortlessly and a lean, mean narrative that rockets the book along. If you're already a Spenser fan, you'll like this one. If you've never read Robert B. Parker, welcome aboard. After Walking Shadow, you'll have a lot of books to catch up on.”—The New York Times

“A deft storyteller, a master of pace, with a plot that pulls us along like taillights vanishing down a dark highway...The wisecracking, deadpan dialogue is as snappy as ever...sheer escapist entertainment.”—Philadelphia Inquirer