From Rio+20 to a New Development Agenda: Building a Bridge to a Sustainable Future (Hardcover) 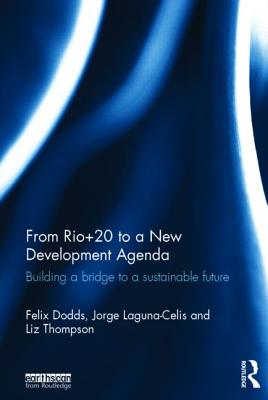 From Rio+20 to a New Development Agenda: Building a Bridge to a Sustainable Future (Hardcover)

Written by practitioners and participants involved in the multilateral process of negotiations, this book presents a unique insider analysis of not only what happened and why, but also where the outcomes might impact in the future, particularly in the UN development agenda beyond 2015.

The book throws light on the changing nature of multilateralism and questions frequent assumptions on how policy is defined within the UN. It shows that Rio+20 was more than an international meeting; it represented a culminating point of decades of successes and failures and a watershed moment for seminal concepts, ideas and partnerships including the Green Economy, zero tolerance on land degradation, the introduction of Sustainable Development Goals, the creation of national measurements of consumption, production and well-being that are intended to go beyond GDP, the introduction of national green accounting and the commitment of billions of dollars for sustainable development partnerships, including Sustainable Energy for All.

The authors conclude by mapping out a new agenda for development in 2015, when the current Millennium Development Goals framework is due to expire. An agenda that will restore faith in the UN and inspire a global response to the demographic, economic and environmental challenges that will define our future in the decades to come.

Felix Dodds is Former Executive Director of the Stakeholder Forum for a Sustainable Future, Associate Fellow at the Tellus Institute, and on the board of Advisors for the Collaborative Institute for Oceans, Climate and Security, Asia European Foundation ENVforum Steering Committee and the Great Transition. Jorge Laguna-Celis is the Senior Advisor on sustainable development to the President of the UN General Assembly; prior to that he was a negotiator and expert on international environmental governance and sustainable development. Since 2006 he has been a member of the Mexican Foreign Service and is based in New York, USA. Liz Thompson is a former Minister of Energy and Environment of Barbados. She was honoured by UNEP in 2008 with the prestigious "Champion of the Earth" award for her work in climate change and environment. She was one of two executive coordinators appointed by the UN at the level of Assistant Secretary General to support the Rio+20 process and negotiations.